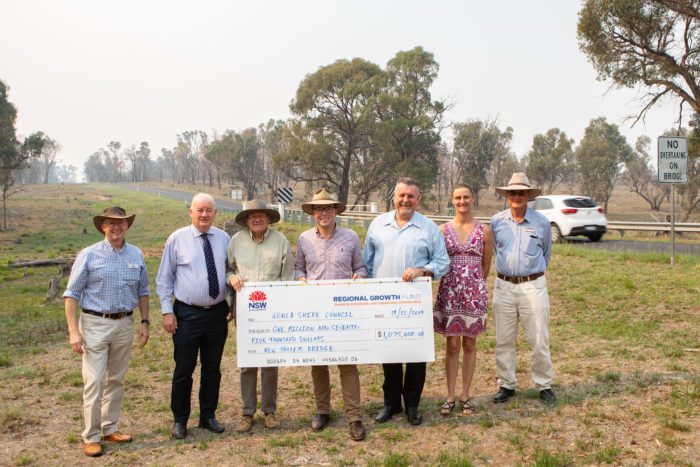 Mr Marshall said the new bridge would replace the existing 90-year-old narrow structure, which is on a dangerous bend of Thunderbolts Way – now one of the most important links in the region’s freight network.

“This grant will allow Uralla Shire Council to construct a new bridge a straighter road alignment, as well as undertake road works to modify the road and construct approaches to the new bridge,” Mr Marshall said.

“The current bridge is narrow meaning heavy vehicles often cross into the oncoming lane of traffic to get across.

“The current road alignment is also a problem with an awkward bend on the southern approach to the bridge.

“This will all be rectified with this funding, greatly improving safety and ensuring freight companies aren’t paying the price for lengthy delays.

“Additionally, this will ensure ratepayers aren’t pouring money into an existing bridge which isn’t fit for purpose.

“I’m excited to see yet another bridge project funded in the Uralla Shire to improve road safety and freight routes.”

All of the other Uralla Shire Council owned bridges on Thunderbolts Way have been assessed as suitable for HML B-Double trucks. Council is discussing with Transport for NSW suitable HML B-Double arrangements for the state owned Lone Pine Bridge over the Gwydir River north of Bundarra.

“The new bridge will both provide safer passage and reduce costs to ratepayers in annual maintenance costs over the next 40 years,” Mr Pearce said.

“It will allow Uralla and the greater region to capitalise on the economic growth opportunities which will come from future heavy mass vehicle (HMV) B-Double movements through the New England region and beyond.

“Council has put forward $25,000 of its own funds to ensure diggers are on the ground and work gets underway on the Tolleys Gully Bridge during the next financial year.”

The grant was made available through the NSW Government’s Growing Local Economies Fund which is one of the programs in the $1.7 billion Regional Growth Fund.