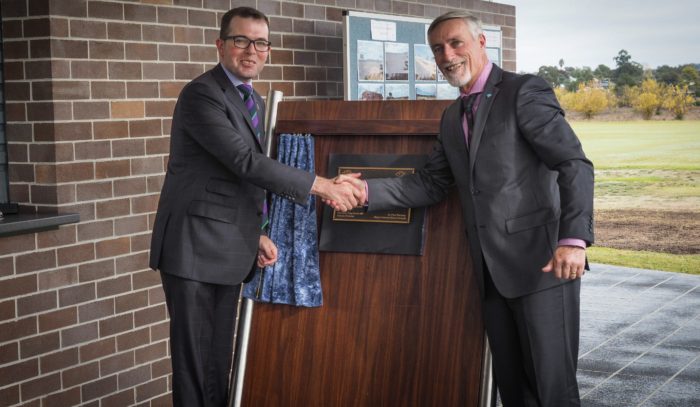 THE transformation of Inverell’s Cameron Park, from a summer-only cricket ground to a regional multi-sporting complex is complete and ready to strengthen grassroots country sport.

In just over 12 months since $510,000 in funding for the upgrade was announced by Northern Tablelands MP Adam Marshall, Cameron Park, which was locally better known as the ‘desert’, has been upgraded from a weekend cricket ground to a facility that gives Inverell the capability to host big sporting events in touch football, soccer, rugby league and cricket.

“Projects like this are not just about putting money towards sport,” Mr Marshall said.

“They are an investment in rural communities that benefit everyone, even those who have never held a cricket bat or kicked a footy or a soccer ball.

“We need more ways of attracting visitors to rural centres, and we need more young people engaged in sport. The Cameron Park development achieves both aims.”

Inverell Shire Council won the funding through the state government’s ClubsGrants program and contributed another $650,000 of its own.

“I argued for Inverell’s application because it linked the sporting park’s redevelopment with the community. There is a strong philosophy of collaboration between the town’s sports clubs, community organisations and council,” he said.

“Sport is an integral part of many country communities, particularly in Inverell. It helps build social cohesion, creates a sense of community and greatly benefits the health and wellbeing of those involved.

“High quality sports facilities such as Cameron Park encourages more people to get active and hopefully supports youngsters to develop their skills and go on a represent Inverell at state and national levels.

“Council has done a magnificent job with the project and the result is absolutely stunning. This is another great example of state and local governments and local service clubs working together to achieve a great outcome for the community.”

Cameron Park’s makeover was made literally from the ground up.

The two cricket ovals were made full size, with new turf and top-dressing supported by an irrigation system.

Two synthetic pitches were laid, and two practice nets, for year-round use.

A new amenities block was built, with kitchen and change rooms, and a playground and outdoor gym in support of parents with children of various ages.

The park was then finished off with new car parking, kerbing and guttering and a perimeter fence.

Inverell Shire Council has been awarded another $930,000 under the 2015/16 ClubGrants funding round for the upgrade of Inverell Sport Complex and will include the construction of a new clubhouse facility, top dressing and irrigation of fields, grandstand seating, field lighting and additional storage for the ten sports clubs based at the complex.

“Inverell has always prided itself of high quality sports facilities and very soon it will be able to lay claim to the best sporting facilities of any community in the entire New England North West,” Mr Marshall said.