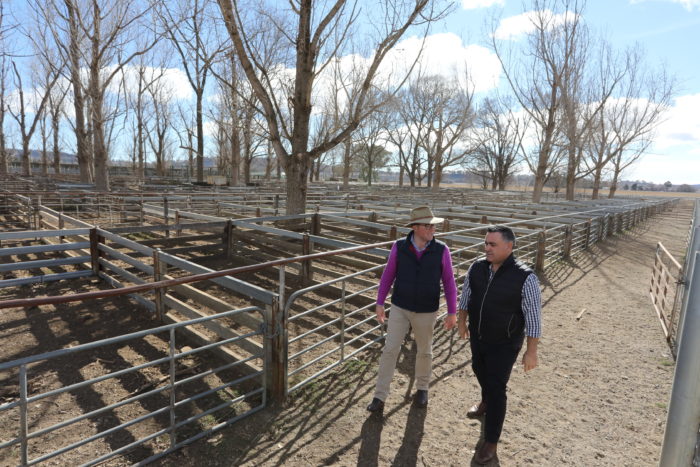 Northern Tablelands MP Adam Marshall, left and Deputy Premier John Barilaro at the Glen Innes Saleyards today, which are about to undergo a $1.3 million upgrade.

THE $1.3 million upgrade of Glen Innes Saleyards has today been named among the first major infrastructure projects which will inject thousands of dollars into the Northern Tablelands economy, funded through the NSW Government’s new $170 million Drought Stimulus Package.

Mr Marshall said the grant will provide an important cash injection to Glen Innes businesses experiencing a down turn during the drought.

“By modernising the facility to increase its capacity and improve operational safety, I expect we will see a higher number of quality Northern Tablelands stock coming through the yards, which in turn will lead to increased competition from buyers.

“This is an important project which will strengthen the region’s agriculture sector and I’m proud the NSW Government has seen fit to announce it among the first to be funded through the Drought Stimulus Package.”

“Getting this money out the door and into pay packets and local economies across regional NSW is a top priority and in the past two weeks we have announced funding for three regional projects worth a total $5.5 million, with more announcements to follow.

“This projects will provide Glen Innes with infrastructure that will attract long-term investment and also immediately stimulate the local economy by providing work for tradies, suppliers and other local businesses.”

The project will see the complete revitalisation of the saleyards with new sheep selling pens, loading ramps, upgraded amenities, installation of lighting and water troughs, sealing of carparking areas and associated signage and landscaping.

“The new yards will provide the scope to increase throughput in the yards by 20 per cent to more than 78,000 head of sheep annually, which will help grow the 20 full-time jobs the yards support in the town,” Mr Marshall said.

Glen Innes Severn Council will also contribute around $50,000 to the project and will look to get underway with the work soon.