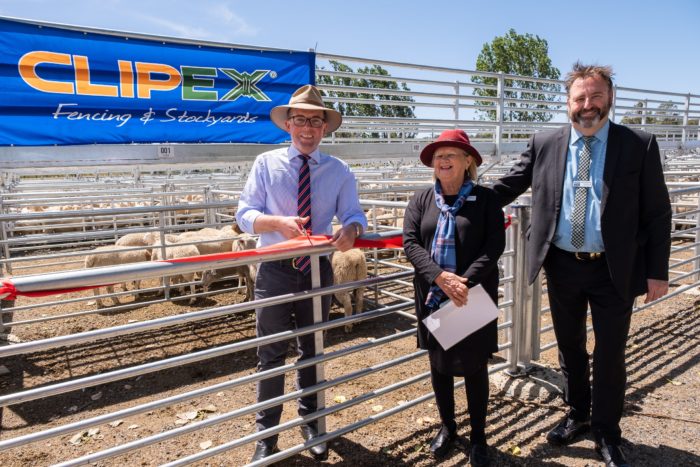 NORTHERN Tablelands MP and Minister for Agriculture Adam Marshall has today called ‘Salo, Salo’ on a special sheep and lamb sale at Glen Innes, marking the official opening of the $1.3 million redevelopment of the town’s sheep selling complex.

A jubilant Mr Marshall said just as our nation’s economy was built on the sheep’s back, now it’s Glen Innes’ turn to capitalise on record sheep and lamb prices

“In the first instance, these new steel pens will allow 5,000 head to be yarded at any time, increasing the annual throughput by 20 per cent, to 70,000 head,” Mr Marshall said.

“While the old wooden yards served graziers well over many decades, these new yards, with covered drafting facilities, lighting and water troughs, will better meet the animal welfare standards expected of the industry today.

“The new steel loading ramp has improved access for heavy vehicles to load and unload at the back of the centre.

“In addition, the canteen and amenities have been significantly upgraded, with the addition of a new toilet block with showers and a designated agent’s room where business can be conducted.

“As we see the reputation and yardings at Glen Innes grow more buyers will be attracted to the selling centre, creating greater competition and higher prices for farmers.

“This redevelopment is just one of a number of projects currently underway in this area which I am confident will assist the local economy to rebuild after the prolonged drought, bushfires and COVID-19.”

Glen Innes Severn Council Director of Development, Planning and Regulatory Services Graham Price said this investment showed a commitment to the future of farming in the Glen Innes area.

“Council recognises that while stock selling activity has increasingly moved to online selling platforms, improving the saleyards was an opportunity to encourage growth and private investment in the agriculture sector,” Mr Price said.

“Agriculture has a GRP of $99 million in our local government area and provides 641 jobs.  Maintaining a livestock selling facility is seen as an important step to ensure local landholders maintain their spending patterns in Glen Innes.

“This project alone has assisted our local economy greatly by providing significant work for local contractors and trades, supporting them to sustain business and retain staff during a difficult economic downturn.

“Glen Innes Severn Council and the Glen Inness Associated Agents would like to thank Adam and the Deputy Premier for their support of this major project for our town.”