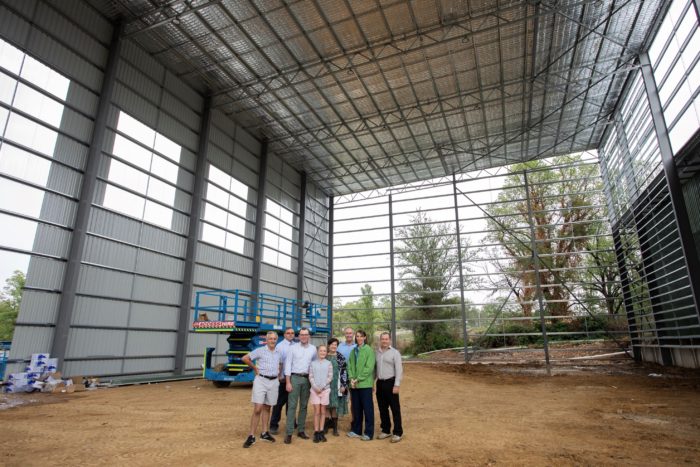 THE $1.4 million redevelopment of the New England Movement and Adventure Centre has reached the halfway mark, with Northern Tablelands MP Adam Marshall inspecting construction on the two-story building in Kentucky Street last week.

Mr Marshall joined Armidale Gymnastic Club coach Wally O’Hara, President Tina Long and committee members to receive an update on the state-of-the-art project which will deliver the best facility of its kind anywhere in northern NSW.

“As you drive across the railway overpass onto Dangar Street and see the new building towering over the existing centre it’s easy to see why this development is going to put Armidale firmly on the elite gymnastics map,” Mr Marshall said.

“Local builders have made the most of the recent dry weather to erect the buildings frame, put down the roofing and install the competition standard lighting ahead of the laying of the specialised floor.

“Weather permitting, work will start this week to install the piers for the new floor on level 1, which is where the rhythmic gymnastics, FreeG (acrobatics/gymnastics), KinderGym area and trampolining will call home.

“The internal fit out of lower facility will also feature change rooms, additional toilets, and a course training room with audio visual equipment, including videoconferencing tools to enabling the club to host education courses.”

Mr Marshall said despite a slight delay early on in the project the build was still on track to be finished by the middle of this year.

“Early in the gyms construction builders struggled to gain access to water to help with the compaction of the new pad,” he said.

“Truckloads of recycled water had to brought onto the site, which was a slow process, however the builders have done a fantastic job in the getting the building to its current state.

“In light of Armidale being announced as the host for Gymnastic NSW’s Country Championships this year, and the following two years, everyone has their fingers crossed the facility will be finished by May.

“This expansion will give Armidale the facilities to potentially train our very own next Commonwealth of Olympic gold medallist right here.”

Once finished the New England Movement and Adventure Centre will be double its current size and will offer a variety of exciting gymnastic disciplines including an exciting Ninja Warrior circuit.

The State Government has contributed $998,039 toward the project.