$1.8 MILLION TO UPGRADE OREGON ROAD IN THE GWYDIR SHIRE 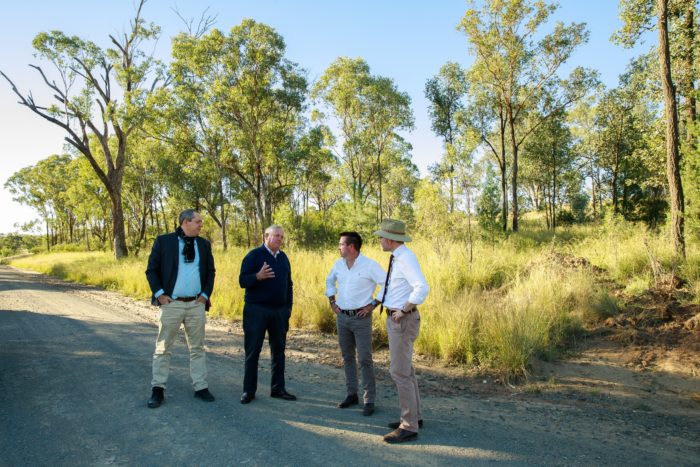 A MULTI-MILLION-DOLLAR upgrade to one of the Gwydir’s most used unsealed roads will improve the flow of agricultural product from the productive ‘golden triangle’ farming area, with Northern Tablelands MP Adam Marshall and Minister for Regional Roads and Freight Paul Toole last week inspecting Oregon Road ahead of its scheduled gravel resheeting work.

The NSW and Federal Governments have jointly contributed $1,790,525 towards the $2.1 million project, through round 2 of the NSW Fixing Country Roads program.

Mr Marshall said a 27 kilometre section of Oregon Road would be upgraded to provide all-weather access for local traffic and heavy vehicles.

“Oregan Road is the most direct route to Warialda for farmers and families in the highly productive Crooble and Croppa Creek areas,” Mr Marshall said.

“The road has long been in need of improvement, with a lack of gravel resulting in its surface becoming impassable after the smallest rain event.

“Additionally, throughout the drought, council had to cease all maintenance on the road due to a lack of water and this has had a significant impact on the quality of the road base.

“Using this grant council will deliver all-weather access to Oregon Road by resheeting the surface with a dust suppressing binder and suitable gravels.

“All weather access will improve the travel time for freight but most of all make for a smoother and safer ride for locals who live in the area.”

“These upgrade works will provide a level of service slightly higher than that typically delivered by council on its unsealed road network,” Cr Coulton said.

“The work is scheduled to start in May and will take approximately six months.

“The project will maintain employment for approximately 10 Gwydir Shire Council staff, along with the involvement of a number of local contractors for haulage and gravel crushing.

“This project is an important step forward for the long-term maintenance of Oregon Road and I think is recognition of the key role it plays in driving Gwydir Shire’s economy.”