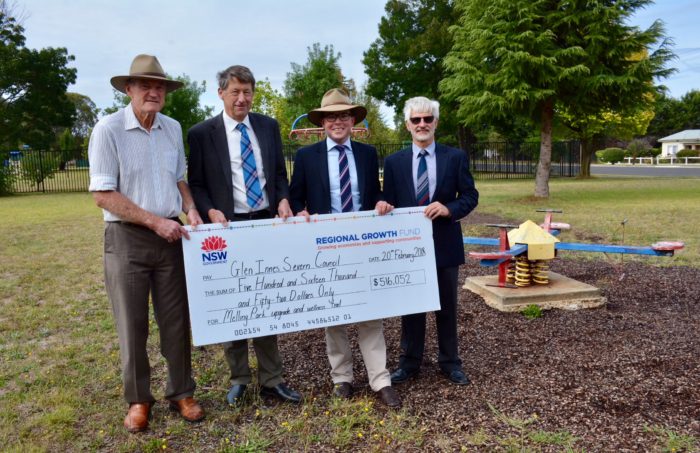 THE State Government has made available a massive funding allocation for the Glen Innes Severn Shire, with $1,872,413 now available to build important community facilities, sporting infrastructure and public amenities.

“Combined with Round One of this program, the Glen Innes Severn local government area will see more than $2.8 million worth of projects start construction over the next year.

“This means double the projects for the Glen Innes Severn LGA, helping upgrade and build twice as many sporting field upgrades, playgrounds, new parks and much more.

Mr Marshall encouraged community groups across the Glen Innes Severn Shire to consider what was needed in their local area.

“As each region has funding locked in, projects in Glen Innes don’t need to compete with the larger centres to get approved. These projects will be designed for the local community, driven by its needs and managed by the local council.”

Mr Marshall said Round One of the scheme had already funded a $516,000 ‘Wellness Trail’, linking two major parks in Glen Innes and expanding amenities in each.

“Construction will begin on Glen Innes’ Wellness Trail in the coming weeks, with the town-spanning project to expand cycleways and parks, encouraging people to leave the car at home and get fitter in the great outdoors.

“A $780,000 funding injection will substantially overhaul seven parks in the Uralla Shire, while Armidale’s Golf Course Clubhouse will see a $409,000 redevelopment to create a unique function centre for the town.