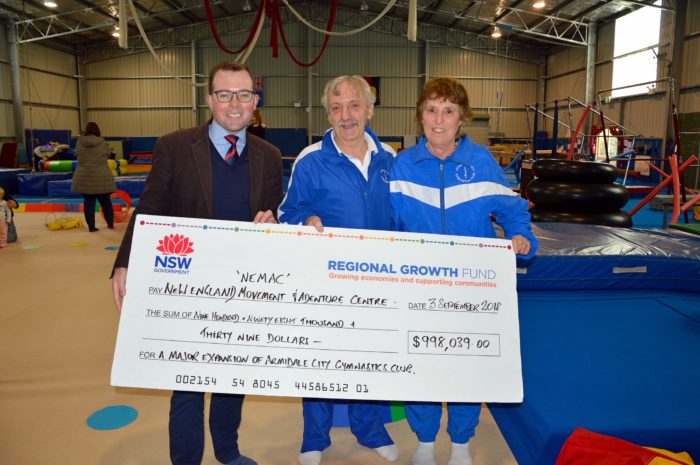 Mr Marshall handed over the $998,039 cheque to an excited club head coach Wally O’Hara this morning at the NEMAC and said the funding would allow the club to double the amount of available activity space, in the current facility.

“The club will double the size of the current gymnastics centre, allowing it to play host state and regional events and championships in trampolining and rhythmic gymnastics,” Mr Marshall said.

“The new building will have two stories, one of which will be a mezzanine formed by the ground floor of the existing building. The mezzanine level will allow for inbuilt floor-level trampolines and a trench bar.

“In addition, the lower level will feature change rooms, additional toilets, and a course training room with audio visual equipment, including videoconferencing tools to enabling the club to host education courses.”

Mr Marshall said Mr O’Hara and the club, which boasts more than 450 local members, had been working on the expansion plans for a number of years.

“This is a huge win for the Armidale Gymnastics Club – they will now have one of the very best gymnastics facilities anywhere outside of Sydney and Newcastle in the whole State,” Mr Marshall said.

“It will help Wally and his team train our region’s gymnasts on apparatus and in a facility of an international standard, meaning we can help many more locals reach their potential in the sport.

“It will also open up more opportunities for occupational therapy, kinder gym and school movement sessions which is wonderful for the community and broader region.”

Mr O’Hara said the funding was brilliant news for the club and had already resulted in further positive news.

“On the back of this news, Armidale has now secured the NSW Country Gymnastics Championships for three years, from 2019,” Mr O’Hara said.

“This will see around 4,000 gymnasts and their families from across the State converge here for around a week – it will be a big event for our club to host and we’ll have a wonderful new centre to host it in.”

Work on the expansion will begin the next few weeks.