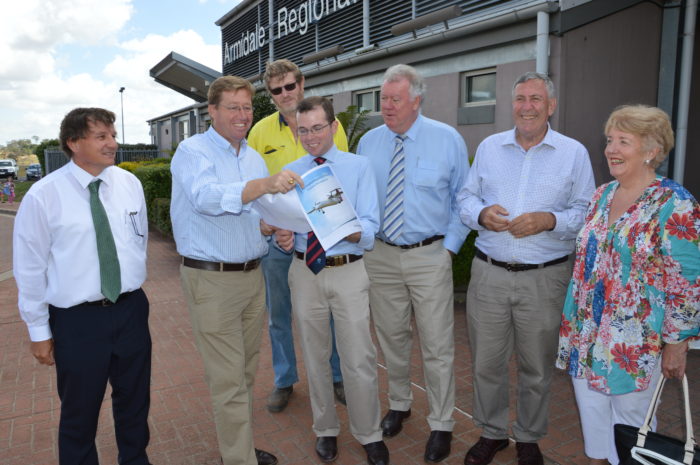 “Today’s announcement means plans to advance the industrial hub development near Armidale Airport can be realised by the local council,” Mr Grant said.

“This is money ready to be used in the next term of Government, if the NSW Liberals & Nationals are re-elected on March 28.

“I am proud the Liberals & Nationals are partnering with councils, like Armidale Dumaresq, to improve roadways and infrastructure neglected during 16 years of the former Labor government.

“Improving access to the industrial hub around Armidale airport will have a positive flow on affect to the surrounding area.”

Minister Gay said right across regional NSW the Liberals & Nationals were building and upgrading roads and bridges to support local communities well in to the future.

“The roundabout will be located about 500 metres south of the existing entrance to the airport on the highway making it easier to access council’s subdivision, the industrial land on the eastern side of the highway and the historic Saumarez Homestead,” Mr Gay said.

“Traffic will rise as a result of the industrial development and with increasing passenger numbers at Armidale Regional Airport we need the appropriate road service in place to mitigate future traffic congestion on the New England Highway.”

Member for Northern Tablelands Adam Marshall said the $1 million was a significant boost to council’s development plans, which would provide a much-need ‘shot in the arm’ to the local economy.

“These works are exactly what the Armidale community expects and deserves and I’m delighted we are able to help deliver it,” Mr Marshall said.

“A re-elected NSW Government and Armidale Dumaresq Council will invest $1 million each in the roundabout project and I will work with Federal Member for New England Barnaby Joyce to secure additional Commonwealth funding for this important project.

“I will continue to fight for what my community needs and take the issues that affect us to the top of Government.”