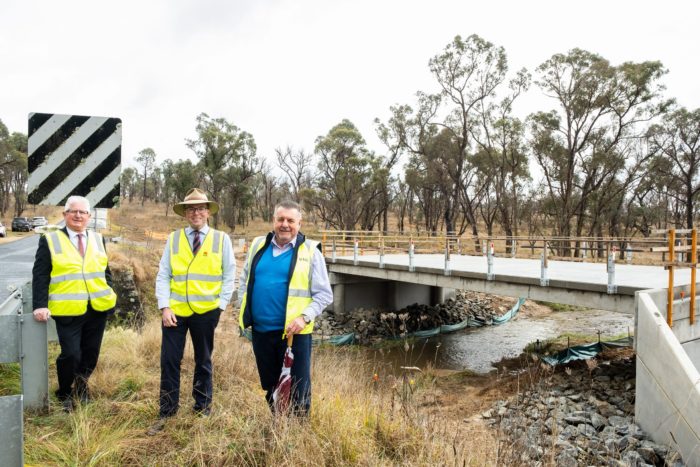 A ONE million-dollar project to improve safety for motorists on Thunderbolts Way has reached its first milestone, with Northern Tablelands MP Adam Marshall last week inspecting the completed first stage of the new Tolleys Gully Bridge, 10 kilometres north-west of Uralla.

Mr Marshall said annually, more than 190,000 vehicles went over the bridge and would benefit from the new structure on a new and straighter road alignment.

“Thunderbolts Way is without doubt one of the most important links in the region’s freight network,” Mr Marshall said.

“There are a number of narrow sections between Uralla and Bundarra which are unsafe, particularly for heavy vehicles.

“Tolleys Gully is one of those, where the road alignment flows into an awkward bend at southern approach to the narrow bridge.

“The new bridge is 8.5 metres wide between the guardrails, allowing plenty of space for vehicles to pass each other safely.

“With that work complete the focus shifts to Stage 2 – the construction of 800 metres of new road approaches to the new bridge.”

Mr Marshall said the entire project was expected to be finished within the next 12 months.

“The new bridge will improve the safety by reducing the potential for serious motor vehicle accidents,” he said.

“I’m excited to see yet another bridge project finished in the Uralla Shire, improving road safety and freight movement.”

“Throughout the bridge build local subcontractors have been used for plant hire and material supply,” Cr Pearce said.

“The specialist bridge subcontractors have stayed in Uralla during the project, enjoying our accommodation and purchasing meals at local hospitality venues.

“Long-term this new bridge will allow Uralla and Bundarra to capitalise on the economic growth opportunities which will come from future heavy mass limit (HML) B-Double movements through the New England and into Queensland.

“I again want to thank Adam and the State Government for providing the financial fuel to get this project motoring.”