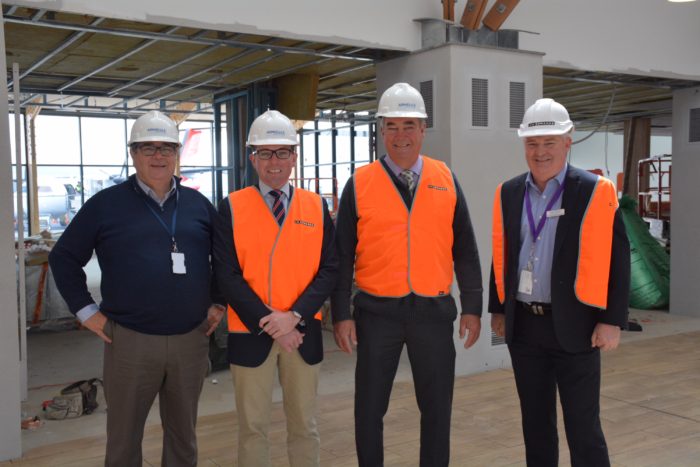 PASSENGERS using Armidale Regional Airport have for months heard the sawing, drilling and hammering as the airport’s future expanded terminal takes shape – but the transformation has until now, has been largely hidden.

On Monday, Northern Tablelands MP Adam Marshall was joined by Armidale Regional Council Mayor Simon Murray and CEO Peter Dennis for a sneak peek – and passengers won’t have long to wait to see the final product.

“We’re now only three to four weeks away from seeing these expansion works finished, which will be the most visible part of a $10.5 million project to build an airport for our whole region for the future,” Mr Marshall said.

“Armidale Regional Airport has seen tremendous growth since the last terminal was built – now welcoming 140,000 passengers each year. With domestic and international travellers increasingly using the airport as a stepping stone to the New England and North West, this upgrade opens up the entire region.”

With the new extension to the terminal completed and now operating, construction crews are expanding and refurbishing the existing building. Major structural works are now complete, with the finishing touches now going on the new arrivals building.

“Builders are now finishing up a few internal walls, laying tiles and doing final plastering work,” Mr Marshall said. “The upgrades are so extensive that the older building is virtually unrecognisable.”

Mr Marshall said that following the conclusion of the terminal upgrades, work would focus on the $1.5 million upgrade of the airside and tarmac.

“Through expanding the terminal to accommodate greater passenger numbers and by improving infrastructure to allow more and larger planes, Armidale is set to accept ever more visitors to our region,” Mr Marshall said.

“Armidale’s quickly outgrown its current airport – but this upgrade will help it cater to another 55,000 passengers in the next decade with further room to grow.”

The NSW Government has contributed $6.55 million to the Armidale Regional Airport terminal upgrade project and a further $1.5 million for the airside upgrade.