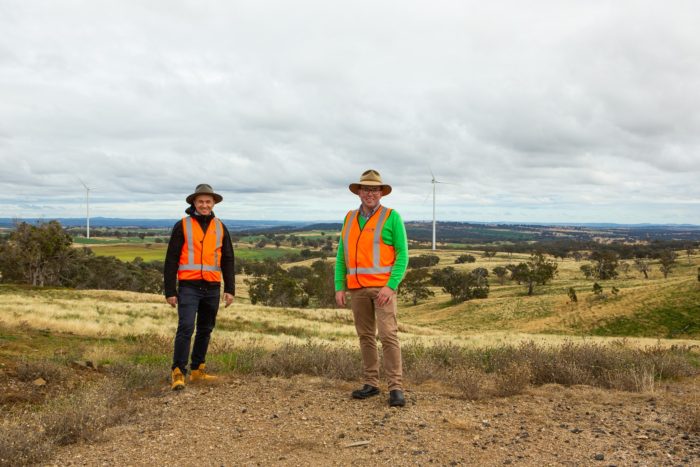 Mr Marshall said the Sapphire Battery Farm, connected to the State’s largest wind farm, would be capable of storing 30 megawatt hours of dispatchable energy, for release into the electricity grid when it’s needed most.

“For the first time in our region’s history we are on the cusp of becoming a net exporter of energy, but just as significant is the need to significantly increase our ability to store what we generate and release it when electricity demand is high,” Mr Marshall said.

“This grant, awarded to CWP Renewables, will construct a large lithium-ion battery next to the 330kV Sapphire Wind Farm substation, to capture excess energy generated from the wind turbines.

“The battery will have the capacity to store enough energy to power every home in Tamworth and Armidale and will be released into the grid at periods of high demand, ensuring the lights stay on when people get home from work and there is increased pressure on the grid.

“The battery will also help reduce electrical losses. Its fast response means it will be able to provide frequency control services, which stabilise the grid and improve power quality.

“This big announcement also marks the first 50 construction jobs to be created as a result of the REZ, bringing crews to the region over the period of the build.

“I see this level of investment as proof the State Government is committed to establishing the 8,000 megawatt New England REZ and hopefully this action will embolden investors to reach into their own pockets and starting planning the region’s next renewable project.”

Mr Marshall said this investment by government was important, as in the next decade a number of the State’s existing power stations would reach the end of their life.

“Without significant investment in new energy generation and energy storage, we run the risk of becoming reliant on other States for a power needs, which is less than ideal,” Mr Marshall said.

“This is yet another step towards getting our region and our State ready for the time when the existing ageing power stations go offline.”

CWP Renewables CEO Jason Willoughby said the grant would enable the company to take the next step in the energy transition planned for NSW.

“The ability to firm up intermittent generation will be crucial for developing new renewable generators to secure the power supply and lower carbon emissions in the state.”