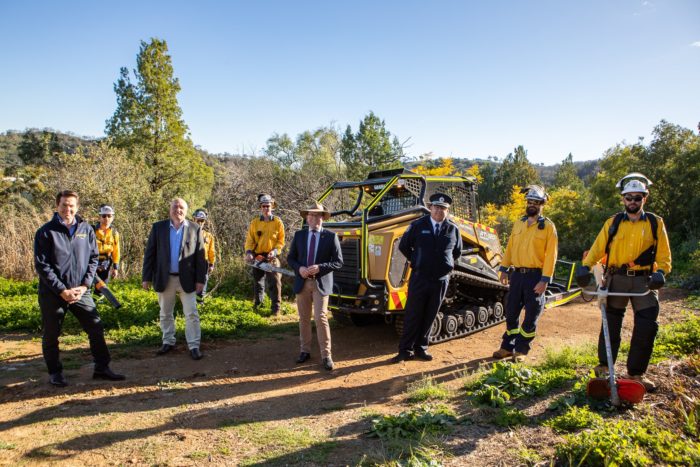 Three new specialised fire hazard reduction teams will soon be on the ground and working to protect properties and key assets across the Northern Tablelands ahead of this summer, local State MP Adam Marshall announced today.

The 10 new full-time paid positions have been funded as part of a $10.7 million State Government campaign to increase the amount of hazard reduction across the region.

“More than 400,000 hectares of the Northern Tablelands was burnt out during the last bushfire season, with 89 homes and tragically two lives lost,” Mr Marshall said.

“In an effort to reduce the risk of future fires of that magnitude, the State Government has embarked on a recruitment drive to place specially trained teams in fire prone communities, to support and supplement volunteers and fast track hazard reduction.

“RFS Brigades in our region will be pleased to know Armidale has been allocated a new mitigation team of four people, while at Glen Innes an additional team of two will join existing crews there.

“In a major coup, a dedicated four man team will be stationed at Moree, with all positons filled by members of the local Aboriginal community.

“Over the next 12 months these crews will be integral in fast-tracking RFS’ hazard reduction programs, including preparing fire trails, controlled burns and slashing of highly vegetated areas.

“They will also help make the homes of some of the most at-risk members of our community bushfire ready, by clearing gutters, thinning nearby vegetation, trimming branches and mowing long grass.

“The 10 local positions have been filled, with the new employees currently undergoing the final stages of training before they hit the ground next month.

“This is a very welcome boost for our region’s firefighting capability and should help assure the community that lessons have been learned from last summer.”

Mr Marshall added the Mitigation Crews would have a big job ahead of them with Armidale Regional and Glen Innes Severn local government areas already in the Bushfire Danger Period.

“Our region has experienced a high amount of rainfall since the end of the bushfires, causing much of the vegetation which was burnt to grow back,” he said.

“As such, the Bushfire Danger Period was brought forward for a number of local council areas including Inverell, Uralla, Tenterfield and Walcha.

“It is crucial we make sure we are as prepared as possible heading towards the warmer months, and I welcome these new positions to ease the workload on our hard-working volunteer RFS personnel.”

The statutory Bush Fire Danger Period runs from 1 October to 31 March, however it may vary due to local conditions. Those planning to light a fire in the open during this time, you will need a Fire Permit.