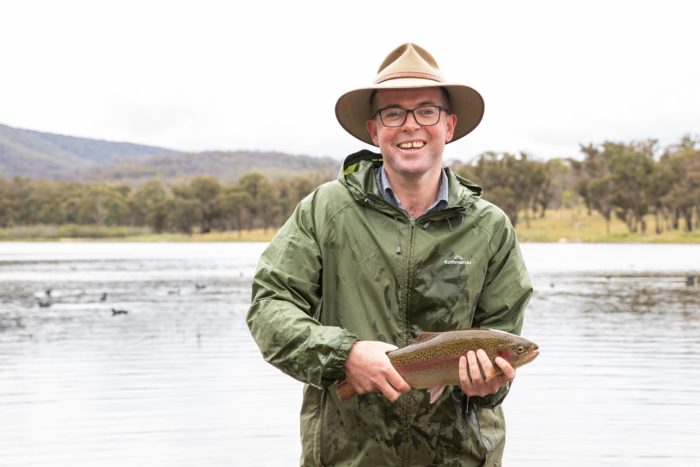 Mr Marshall joined NSW Fisheries staff from Ebor’s Dutton Trout Hatchery for the special release of the juvenile species into the waterway, as part of the State Government’s annual fish re-stocking program.

“While they’re too small to reel in just yet, I know the local fishing community will welcome today’s stocking because one day these fingerlings will grow into a big enough catch to brag about,” Mr Marshall said.

“Our fisheries experts from the NSW Department of Primary Industries (DPI) have chosen Dumaresq Dam because it has the ideal conditions to allow these fingerlings to flourish and grow to full maturity.

“It’s critical that we support the State’s recreational fishing industry. During the holiday season many anglers will be wetting a line and I want to ensure they’ll always land a catch, now and into the future

“These juvenile fish species were bred at the Dutton Trout Hatchery at Ebor from healthy breeding stock which have contributed to the state’s trout stocking program.”

“Waterways in the Northern Tablelands and right across the State did it tough during the drought, so this stocking is a massive vote of confidence in how much conditions have improved,” he said.

“This re-stocking program is huge opportunity to give back to the environment, with fish working to keep waterways clean and clear for future generations to enjoy.

“The Dutton Trout Hatchery produces more than 1.6 million trout each year – around 1.3 million Rainbow Trout and 300,000 Brown Trout fry and fingerlings, in support of the State’s valuable recreational fishing sector.”

Recreational fishers are encouraged to use the NSW Recreational Fishing Guide, available from DPI Fisheries Offices, most tackle shops or online at www.fisheries.nsw.gov.au