$10,000 TO GIVE THE ARMIDALE PLAYHOUSE A NEW STARRING ROLE 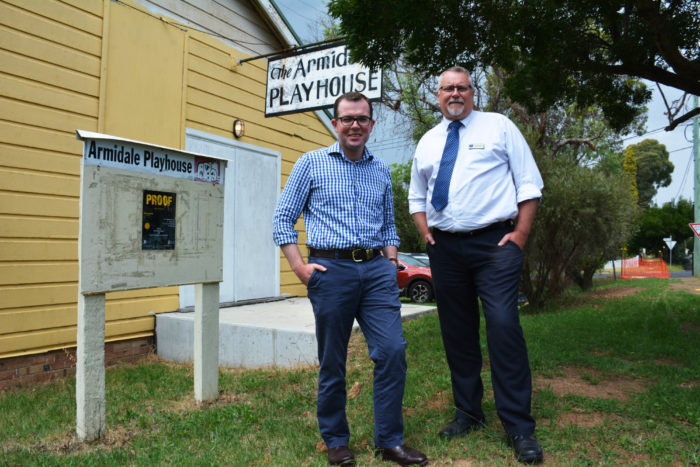 COMMUNITY theatre in Armidale will take centre stage, with a major upgrade to the Armidale Playhouse to be supported by a $10,000 NSW Government grant.

“A small and intimate venue housing around a hundred theatregoers, the Playhouse should play an important role in Armidale’s suite of performance spaces,” Mr Marshall said.

“While the building has fallen into disrepair and been used primarily as storage for the last decade, a major works program will revitalise the building, opening it up for community use once more.

“Smaller theatrical groups, particularly youth theatre, dance, and groups catering to young people with disabilities will be able to make the most of this small, not for profit theatre space.

“This $10,000 grant has facilitated the removal of the old bathroom facilities, which required the safe disposal of some asbestos cladding.

“With these works now complete, further major upgrades can begin to replace the building’s cladding, rebuild interior walls and refurbish the theatre space.

“Once this extensive list of upgrades is complete, thousands of excited audience members can fill seats at Playhouse performances once more.”

“The Playhouse is independently owned – we will be a not for profit that controls our own theatre space, offering a small intimate theatre that doesn’t have to worry about profits,” Mr Trestrail said.

“With a smaller venue, it will be easier for the community to access, so there’s potential for smaller scale entertainment, music recitals and concertos.”