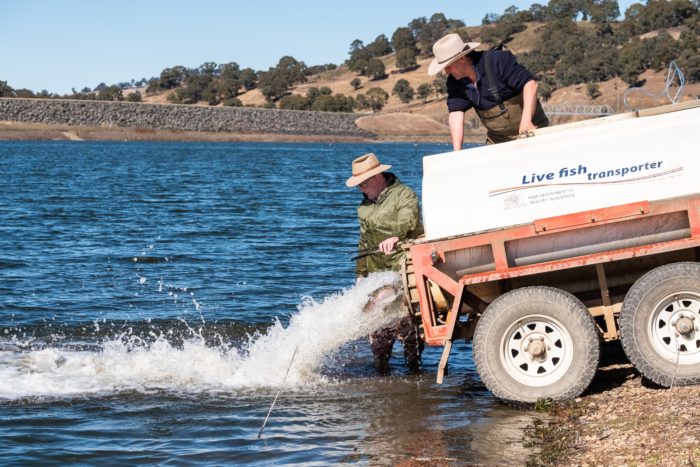 Mr Marshall said the release, and another one next week in the dam, would provide greater recreational fishing opportunities for the region’s anglers.

“With Malpas Dam back at 54 per cent, now is the perfect time to introduce these fish, which were broodstock from the Dutton Trout Hatchery at Ebor, into their new home,” Mr Marshall said.

“The State’s fisheries experts have chosen to stock Malpas Dam because it offers the best environment for these fish to grow; they are already too big for predators like Redfin to prey on, so this is an ideal location, right in our own backyard.

“For keen anglers this release offers a golden opportunity to make a trophy catch, with a number of the fish around 70 centimetres in length.

“Throughout the year fishing groups like the Guyra Angler’s Club hold competitions on the banks of Malpas Dam, drawing visitors to the area and providing a financial boost to the Black Mountain and Guyra economies.

“This release will hopefully encourage more of those events and is a boost to anglers who have been unable to pursue their passion in recent times due to drought and dwindling water supplies.

“This program is evidence the Government is committed to ensuring local fish populations not only regenerate but flourish.”

“While it brings me much joy to be able to provide anglers with a great catch, more importantly rebuilding fish populations is integral to bringing aquatic areas back to health,” he said.

“Our waterways did it tough during the dry and this restocking program is huge opportunity to give back to the environment, with fish working to keep waterways clean and clear for future generations to enjoy.”

In conjunction with the Gaden Trout Hatchery at Jindabyne, this is part of the Government’s overall stocking program of three million trout and salmon produced each year.

Recreational fishers are encouraged to use the NSW Recreational Fishing Guide, available from DPI Fisheries Offices, most tackle shops or online at www.fisheries.nsw.gov.au