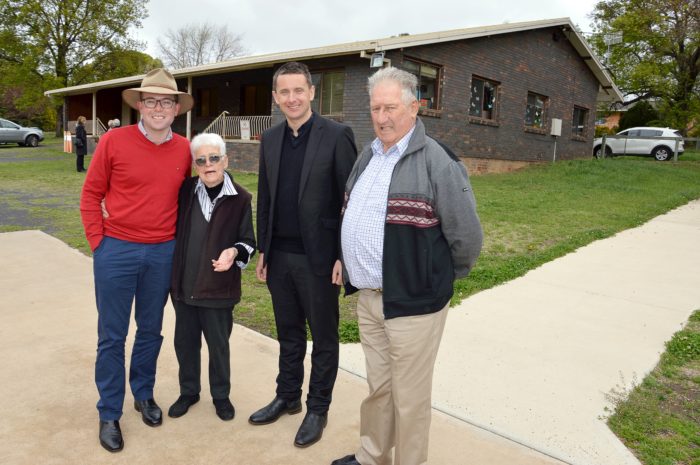 Mr Marshall said the hall would also undergo major works so it could meet provisions set out in the Glen Innes Severn Council’s disaster recovery plan.

Under that plan, the hall would be used as a shelter for residents in the case of a major disaster or emergency but it needs substantial upgrades to its toilet and bathroom facilities to allow for better disabilities access and amenities.

“At the moment the church hall doesn’t adequately meet current requirements but this funding will achieve that standard,” Mr Marshall said.

“In the case of any emergency the hall is listed as a shelter and it could be used for an extended period, so suitable toilets and ablutions facilities are essential.

“And that also means that it has to have proper access for people with disabilities and those in wheelchairs and for anyone who finds it physically difficult to negotiate some big steps from the church grounds into the hall itself.”

“But there’s also young children who use the hall and its grounds on a weekly basis, and easy access to the hall for them is also difficult.”

The project will improve mobility access with a new ramp into the hall, renovate the existing toilet facilities with a new unisex wheelchair accessible toilet and bathroom and install an internal ramp to those amenities. A new external access door will be constructed as well.

Mr Marshall said the hall was used by a number of community groups for various purposes, including church activities, dinners, and other social functions and family events like birthday parties and funeral wakes.

“But the bathroom and toilet areas are not wide enough for people to move about in wheelchairs and there’s no shower facilities, so that’s an issue on a regular basis, aside from any emergency that would require it being used for any extended period,” Mr Marshall said.

“We are very grateful for this chance to access substantial funding to improve facilities and create a safe place for the community in times of trouble,” Rev Robinson said.

“The facility improvements will also make the hall more desirable for the regular community uses such as celebrations, gatherings and meetings, in turn providing the church with an improved income stream to allow ongoing upgrades into the future.”

Mr Marshall said the latest project followed a NSW Government heritage grant of $45,000 announced four months ago to really raise the roof of the iconic Holy Trinity Anglican Church next to the hall.

He said then that the historic church building was set for a born-again roof to plug the leaks of the old one, installed nearly 50 years ago.

“Holy Trinity is one of the oldest churches in Glen Innes, which has a rich heritage of architecture in local places of worship, so it’s important to preserve that heritage and that beautiful building landscape, but also ensure its associated buildings are brought up to scratch for modern day and future use,” Mr Marshall said.