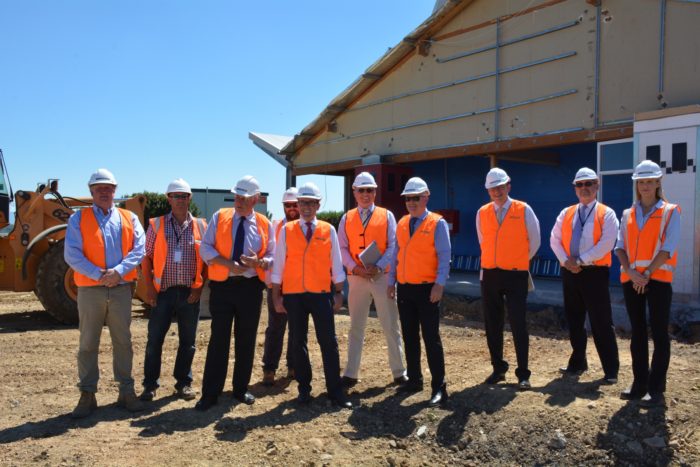 MEMBER for Northern Tablelands Adam Marshall visited Armidale Regional Airport today to announce that construction works have commenced on the upgrade of the airport terminal.

“The NSW Government is proud to be providing more than $8 million in funding to the upgrade Armidale Regional Airport, which will boost tourism in Armidale and help grow our local economy,” Mr Marshall said.

“This stage of the project involves a $9.42 million expansion of the airport terminal, and will include a new café and retail area, a new baggage carousel and more passenger seating.

“More and more carriers and passengers are recognising Armidale as a destination for business and pleasure. In 2016, we saw another carrier service launch, and as more groups invest in the region it’s only fair we do the same.”

The project is largely funded under the NSW Government’s Restart NSW Regional Tourism Infrastructure Fund, with $6.55 million contributed to the terminal upgrade and a further $1.5 million for the airport airside upgrade. The upgrade to the airside will enable aviation related businesses to have better access to the tarmac.

“In addition to our beautiful new terminal, the upgrade will also provide Armidale with an expanded airport apron, allowing for more flights into and out of Armidale and the capacity to accommodate larger planes,” Mr Marshall said.

“By investing in these major works, we are ensuring the airport will be able to support growing passenger numbers and stimulate Armidale’s continued growth as a regional economic hub.”

Deputy Premier and Minister for Regional NSW John Barilaro said that this significant project milestone marks another step forward in the NSW Government’s commitment to delivering infrastructure in regional areas.

“The Government is committed to supporting NSW’s regional heartland, and these infrastructure developments are making regional NSW a more attractive place to live, work and visit.”

The NSW Government has committed a total of $70 million dollars for upgrades to 27 airport projects across regional NSW.