$114,000 SECURES BACK UP RAW WATER SUPPLY FOR BONSHAW COMMUNITY 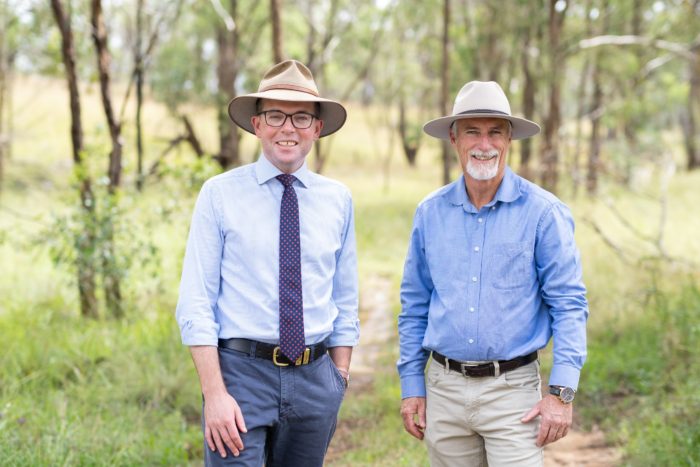 The State Government has stepped in to support Inverell Shire Council’s effort to drought-proof the border community of Bonshaw with Northern Tablelands MP Adam Marshall, left,  announcing assistance of up to $114,000 for the establishment of new bores, alongside Mayor Paul Harmon.

ADDITIONAL bores will be the answer to an ongoing raw water shortage faced by the border community of Bonshaw, with Northern Tablelands MP Adam Marshall today announcing the State Government will provide $114,000 to assist Inverell Shire Council to establish an emergency back-up supply.

In December last year, Mr Marshall wrote to Water Minister Melinda Pavey seeking emergency funding, after council raised concerns Bonshaw was getting close to running out of water due to low flows in the Dumaresq River.

Mr Marshall said the funding would ensure the 140 of residents of Bonshaw don’t find themselves without water.

“Despite the incredible amount of rain in the lower half of the electorate, many communities along the Queensland border have unfortunately missed out on the bulk of falls,” Mr Marshall said.

“Bonshaw gets its water from a bore which is linked to the Dumaresq River, however low flows from the lack of rain has prompted council to explore alternative supply options.

“While the majority of residents in the Inverell Shire have not had to worry about any kind of water restrictions for some time, Bonshaw locals have had to live with only using 10 litres per day since December.

“This funding will assist council to get to work test drilling potential bore sites and connecting the successful bore to the village water supply.

“I want to thank Minister Pavey for her swift response and assisting to give the people of Bonshaw the assurance if dry conditions continue they water will still flow from the tap.”

Council has been working closely with DPIE Water to investigate potential bore sites around Bonshaw.

Inverell Shire Mayor Paul Harmon said during a normal season, the existing Bonshaw bore had been able to meet the demands of the community.

“The severity of the drought has been particularly tough for residents in the north of the shire and I thank Adam and Minister Pavey for working with Council to help the Bonshaw community.”