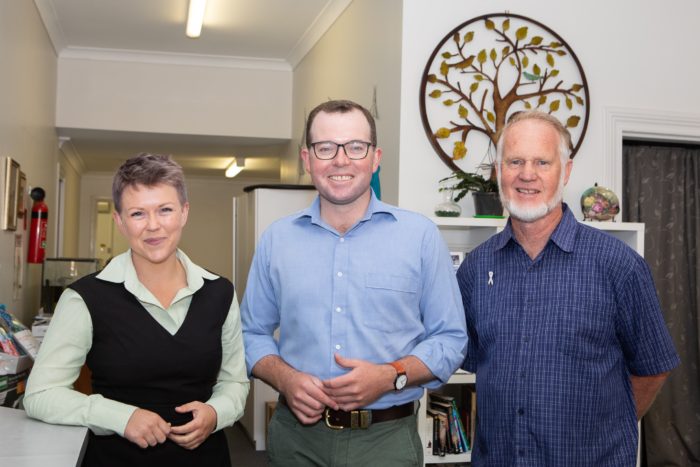 Mr Marshall said the event had become a symbol of the town’s efforts to fight back against the devastating social problem.

“Inverell has shown that as a community it is united in speaking up and speaking out against domestic and family violence,” Mr Marshall said.

“Unfortunately, for services like the Rural Outreach and Support Service and Inverell Women’s Refuge, domestic violence and its impacts is still an issue which they are dealing with every week.

“In the past, the White Ribbon Ball has been an effective way of bringing emergency services like police, support organisations and the community together to raise awareness of domestic violence.

“This grant will support the Inverell Domestic and Family Violence Committee in its planning of this year’s event.”

Rural Outreach’s Vicky Higgins said domestic violence was likely to always be an issue in the community and that’s why public awareness was important.

“While domestic violence is still highly prevalent across our region, I think what the White Ribbon campaign has been able to achieve is an increase in the level of reporting of abuse,” Ms Higgins said.

“Domestic violence isn’t always physical but comes in many forms such as financial, verbal or emotional abuse and so until they talk about it many people don’t actually realise they are in living in a domestic violence situation.

“I think Inverell’s participation in White Ribbon and other anti-domestic violence campaigns has encouraged a greater understanding of what domestic violence is among people of all age groups.

“I want to thank Adam and the State Government for their continued support of this event.”