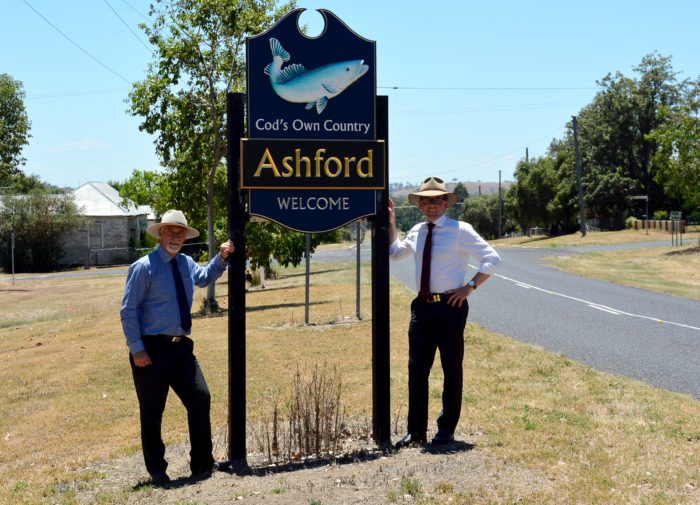 VILLAGES in the northern reaches of Inverell Shire will have their unique identity put on show, with new vibrant signage and community information to be displayed in Yetman, Bonshaw and Ashford thanks to a partnership between Inverell Shire Council and the NSW Government.

Member for Northern Tablelands Adam Marshall announced the $12,000 grant during a visit to Ashford this week with Inverell Shire Mayor Paul Harmon, who said council would match the grant dollar-for-dollar.

“The Inverell Shire is renowned for its beautiful and locally-produced signage – it provides an excellent first impression for visitors and locals alike,” Mr Marshall said.

“Creating the first impression travellers have approaching a village, a good sign can encourage people to get out of the car, stretch their legs and contribute to a town’s economy.

“With this funding Bonshaw will now boast vastly improved entrance signage and Yetman and Ashford will get community information boards, alerting villagers and travellers to local events, attractions and community programs.

“Residents have been looking for a way to put their best foot forward, and this is it.”

Mr Marshall said the signage would be produced at the Danthonia community near Inverell and designed with significant local input, with council to work with schools to create designs that are then voted on by the community.

“Bonshaw residents have enthusiastically requested this signage – and they’ll be in the driver’s seat to ensure it’s the best it can be.”

“Our council prides itself on being forward thinking and this signage will invaluable for both the community and travellers,” Cr Harmon said.

“This gives us an opportunity to highlight each village’s unique traits and show the exceptional pride of the community.”