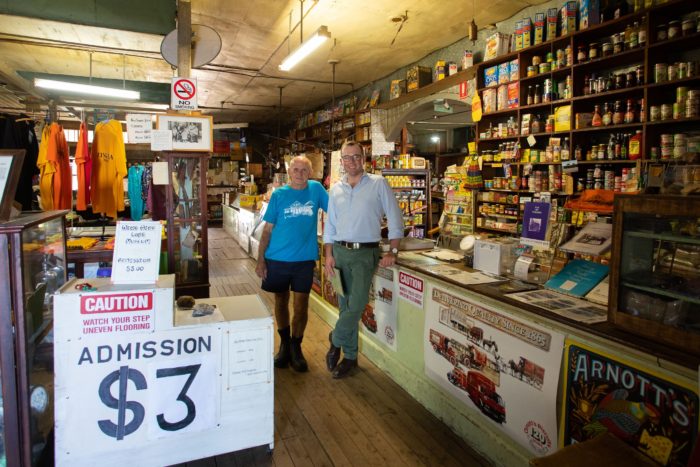 Mr Marshall said the current electrical system was installed in the 1950s and the museum’s volunteers were concerned it had become a serious fire hazard.

“For 70 years, the electrical wiring in the Wing Hing Long General Store has kept the lights and heaters on in the 140-year-old building,” Mr Marshall said.

“Updating the wiring will reduce the chance of any unfortunate fires developing in the museum and work to prevent the destruction of the important local landmark.

“Part of this grant will also update the lighting system throughout the building, making it safer for people to walk through the building while also illuminating the treasure trove of items which are on display.”

President of the Wing Hing Long Museum Danny Coleman said the facility was an important window into the town’s past.

“The legacy of the 900 Chinese migrants who lived in Tingha at the height of the tin mining boom in the 1880s can still be seen today,” Mr Coleman said.

“Over the years our committee has made a considerable effort to preserve the Wing Hing Long General Store building, using it to house a comprehensive collection of local artefacts – some dating back to the 19th century.

“Recently, we have become concerned about the state of the building’s old electrical wiring, fearing a single rogue spark onto an old newspaper or piece of clothing, could result in our entire collection being destroyed.

“We have already engaged an Inverell electrician to undertake the work which we anticipate will take about a week to complete.

“Prior to COVID-19 the museum was incredibly busy with organisations, clubs and school groups calling in, however sadly that has stopped due to social distancing restrictions.

“With these measures starting to ease, we look forward to again opening our doors and providing visitors with a unique insight into our region’s past.”