$12,900 GRANT GETS GILGAI HALL TRUSTEES ON THE MOVE 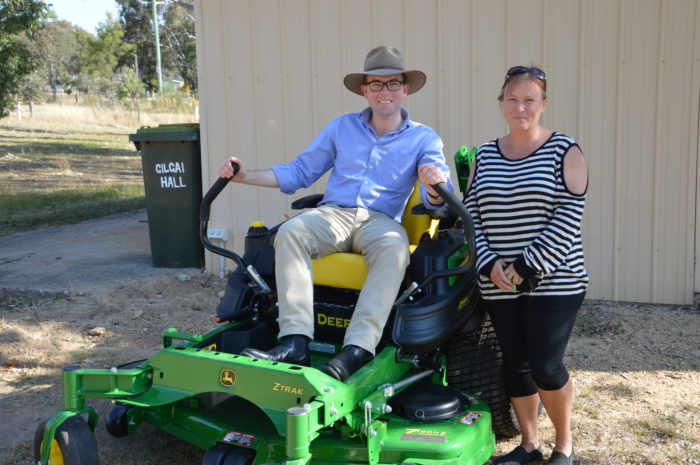 THE task of mowing the great expanse of grass, lawn and weeds that surround the Gilgai Public Hall and war memorial site has just got a whole lot easier with the purchase of a new ride on mower, compliments of a $12,900 NSW Government Public Reserve Management Fund (PRMF) grant.

Mr Marshall said the trustees had been thrilled when he notified them a few weeks earlier that their grant application had been successful and he was pleased they’d wasted no time in finding a mower that suited their needs and budget.

“The trustees and community volunteers have been struggling for quite a while to make do with two very small, rather unreliable mowers,” Mr Marshall said.

“The job of mowing has been onerous, hot and uncomfortable so this new purchase has put a smile on everyone’s faces. The mower has only just been delivered from an Inverell business and I’ve been told, come Saturday morning, it will be taken on its first run around the grounds.”

Mr Marshall said the trust also has plans to install power and a new water tank at the utility and storage shed.

“In the past the trust has received a few very useful PRMF grants to replace the hall’s ceiling plus the hot water system and repair the footpath around the village’s war memorial,” he said.

“As is the case with most small community halls, they get used regularly and it’s important the Government provide financial support to help trustees keep them well maintained.”

Gilgai Hall Trust Secretary Dianne Marlow said they were thrilled to get the new lawn mower as the old mowers were no longer up to the job and were in serious need of repair and maintenance.

“We’re very pleased to receive the funding and now looking forward to getting the power connected to the storage and the water tank installed,” Mrs Marlow said.