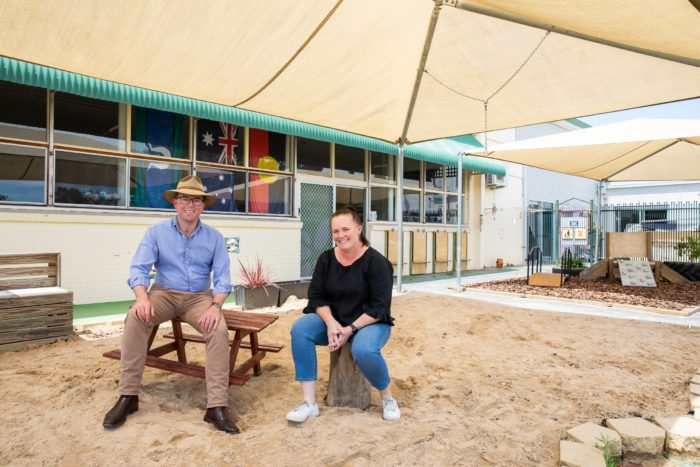 Northern Tablelands MP Adam Marshall, left, and Inverell District Family Services’ CEO Nicky Lavender take some time out in the sandpit at the Bush Preschool, which is about to see some more shade provided for children.

EFFORTS to grow the successful ‘Bush Pre-school’ operated by Inverell District Family Services (IDFS) have today been given a boost by the State Government, with Northern Tablelands MP Adam Marshall announcing a $14,258 grant to install a shade structure and second stage at the program’s home-base on Campbell Street.

The Bush Pre-school has been running since last year, with IDFS’ Northern Road Activities Van operating the program at Ross Hill Reserve, one day a week.

Mr Marshall said the new shade area at Campbell Street would help further develop the home-base, where students meet in the morning before travelling to the Bush Pre-school.

“Bush-Preschool is an innovative program that encourages children to get outdoors and immerse themselves in their local environment,” Mr Marshall said.

“This grant will enable IDFS to forge ahead with its plans to extend the program an additional day, providing a shaded outside eating space for the 15 children who participate.

“A second stage for performing arts and play will also be constructed as part of the premises’ playground.

“Work to install the shade and stage will take place at the end of this year, so facilities are ready to go for the start of the 2021 school term.”

“We are so excited about how this project has progressed, with plans to have our new room open in a matter of weeks,” Ms Lavender said.

“Over several months nine local trades, under the head contractor Danbuilt Pty Ltd, have been outstanding in their work transforming former office space into an additional preschool room, to cater for children between the ages 3 to 5.

“We have now lodged our application with the Department of Education to increase our enrolment numbers from 48 to 60 children per day.

“Recruitment for three new educators has also commenced to provide care for our additional children.

“Overall, this has project has benefited not just IDFS but the entire Inverell community.

“It has created much needed additional care positions for local families while also generating new employment opportunities in early-childcare and work for local trades.”