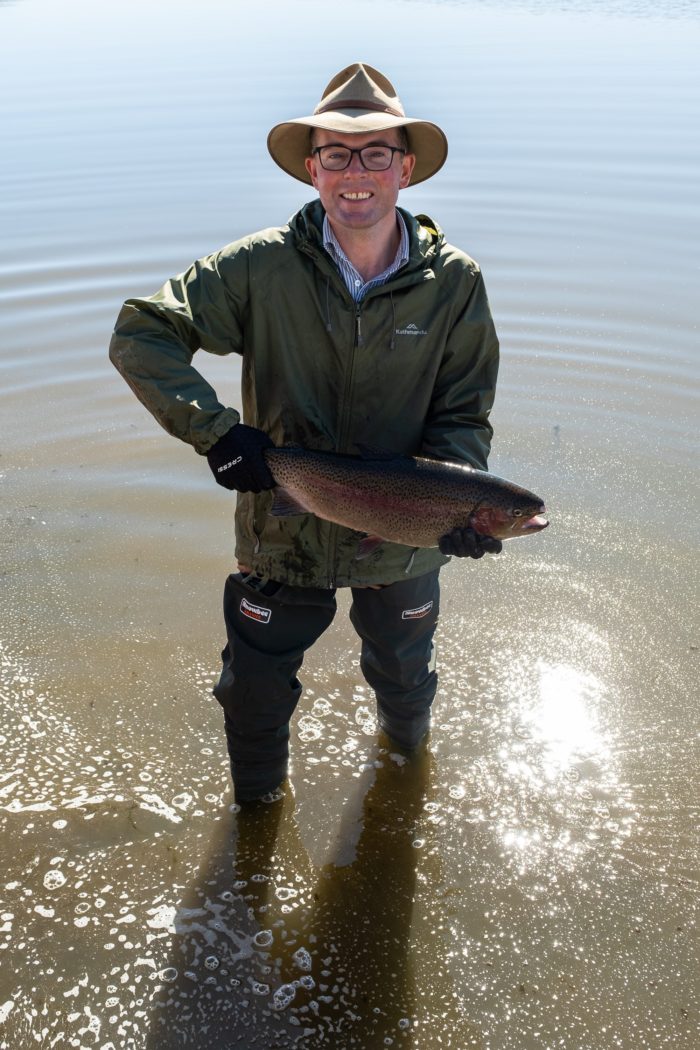 Hundreds of Rainbow Trout, bred at Ebor, have been released into Dumaresq Dam in the last 12 months and soon fishing enthusiasts will have a new $144,000 jetty at the dam to catch them from.

A NEW 25-metre jetty will give anglers at Dumaresq Dam a greater chance of landing an elusive rainbow trout, with Northern Tablelands MP and Minister for Agriculture Adam Marshall today announcing a $144,000 State Government grant for the project.

“Over the last 18 months hundreds of rainbow trout, bred at the NSW DPI’s Dutton Trout Hatchery at Ebor, have been released into Dumaresq Dam, as part of the State Government’s Noah’s Ark restocking program.

“There soon will be no secret as to where the best fishing spot at the dam is, with an accessible jetty giving anglers, of all levels of mobility, uninterrupted access to the water.

“Disability compliant access paths will connect the car park and jetty. Work is expected to start in the first half of 2022.

“This particular project is the result of consultation with the Guyra, St Kilda (Armidale) and Uralla Fishing Clubs, which all see it as a way to promote the region as a premier inland fishing destination.

“Located only eight kilometres from Armidale, there is no reason the banks of the reservoir should not to be packed with people all-year-round.

“I anticipate with the jetty and redevelopment complete, Dumaresq Dam will become a tourism destination that has the ability to inject thousands of dollars into the visitor economy annually.”

“This is your licence fees at work, so if you’ve got an idea then please, get your application in and take advantage of this available funding,” he said.

Grants are available for both large projects valued at more than $10,000 in funding and small projects involving less than $10,000. Joint saltwater and freshwater projects are also encouraged.

Funding guidelines and application forms for the next round of the Recreational Fishing Trusts grants are available at www.dpi.nsw.gov.au and, DPI Fisheries can be contacted on (02) 4916 3835 or by emailing recreational.fishingtrust@dpi.nsw.gov.au