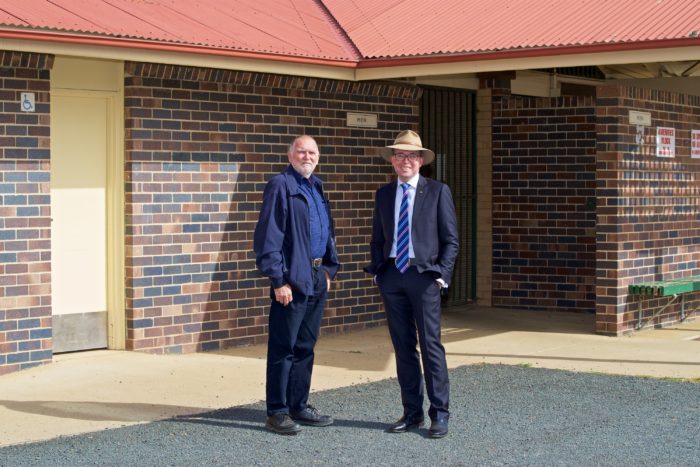 The restoration of the Armidale Showground’s historic western grandstand and two main pavilions will continue this year, with Trust Chairman Steve Mepham, left, and Northern Tablelands MP Adam Marshall discussing a $146,175 plan to repaint the buildings.

THE restoration of the Armidale Showground’s historic western grandstand and two century-old pavilions will continue this year, with Northern Tablelands MP Adam Marshall today announcing a $146,175 State Government grant to repaint the buildings.

In the last 12 months, the government has provided more than $1 million in stimulus

and grant funding for improvements at Armidale Showground.

Mr Marshall said repainting the significant western grandstand would aid in the protection of the recent restoration works.

“Since 2017, almost $700,000 has been spent by the State Government to restore the eastern and western grandstands, both of which were condemned due to significant structural damage over many years,” Mr Marshall said.

“Rot had developed in the century old grandstands’ foundations, rendering the seating area unsafe for use. This was a great inconvenience for Armidale and New England Show Society and the many equine groups which host events on the grounds.

“Since the major restoration the land managers have been pulling out all the stops to ensure all the showground’s buildings remain safe, functional and open to the public.

“The western grandstand will be repainted in heritage cream, providing protection from the weather and addressing damage recently caused by pigeons that roost in the eaves.

“This paint job marks the final stage of the grandstand refurbishment.”

Mr Marshall said the main pavilion and trade pavilion would also be given an external face-lift.

“Repainting these buildings is a little more involved, with the original lead based paint first needing to be removed from the exterior,” he said.

“Prior to 1970 paints containing high levels of lead were commonly used in Australia, however we now know it is hazardous to people’s health when it flakes, and it was subsequently banned in 2010.

“With the old paint removed, local painters will be able to get on with reinvigorating the pavilions, also in heritage cream, so they look their best come show time in 2022.”