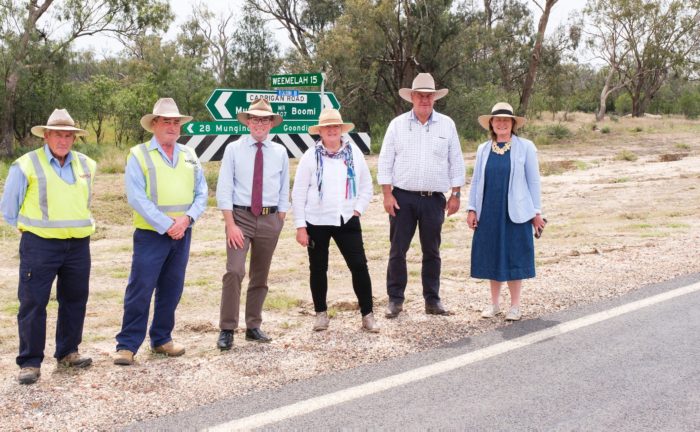 FARMERS between Mungindi and Boomi are about to reap the benefits of both a record harvest and a major $15.2 million road upgrade, as Northern Tablelands MP Adam Marshall joined with Moree Plains Shire Council late last week to officially open the final 56-kilometre sealed section of the strategically important Carrigan Road.

“Without a doubt this has been one of the most strategically important council road projects to take place in the Moree Plains Shire in a generation,” Mr Marshall said.

“With more than $30 million of agricultural product traveling off farm and along the freight corridor each year the economic value all-weather access delivers to the Moree Plains Shire cannot be under estimated.

“Also, the community will now have greater peace of mind that emergency services will have improved access in a disaster and children will have a smoother and safer ride on the school bus.

“This upgrade of Carrigan Road something many in the district believed would never happen, having unsuccessfully campaigned for its sealing for more than 20 years and now it’s finished!

“The project has also strengthened multi-modal freight connections between regional producers and the future Inland Rail facility, connecting to the Moree Special Activation Precinct, as part of the Narrabri to North Star section of the Inland Rail.

“This road upgrade supported 35 jobs since work kicked off in March 2019, and crews have done an incredible job through the challenges of drought, bushfires, floods and COVID-19 to deliver this game-changer of an upgrade.”

Mr Marshall gave recognition to the engineers and road crews from Council, who have worked on the project since the first tranche of State Government funding was announced in 2018.

“The high quality workmanship which gone into forming up and sealing Carrigan Road has already withstood its first major test,” he said.

“In the past the slightest rain event would force the road’s closure and any inundation caused thousands of dollars and many hours of repair work.

“The new surface not only withstood the March flood with no damage but it was also one of the first roads to be re-opened to traffic when the water got away.

“The standard of work is absolutely second to none and I congratulate and thank those who have worked to build such a high quality road that will serve the local community and industry for many years to come.

“Even when the drought was at its absolute worst, farmers along Carrigan Road continued to provide water for road building, such was their passion to get this project done.”

Moree Plains Shire Mayor Katrina Humphries said well in excess of $30 million worth of agricultural produce in ordinary times, and potentially more out of drought, is transported off properties along this road every year.

“This caused ongoing delays for primary producers across the Moree Plains Shire.”

The project was made up of $14 million from the NSW Government’s Fixing Country Roads program, $1 million contribution from Moree Plains Shire Council, and $150,000 from industry funding.