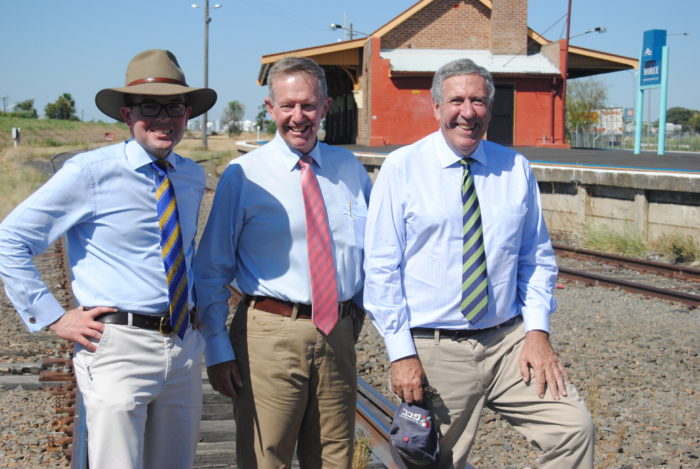 Minister for Roads and Freight Duncan Gay, NSW Member for the Northern Tablelands Adam Marshall and Federal Member for Parkes Mark Coulton last Friday in Moree announced Expressions of Interest are open for the $15 million Fixing Country Rail pilot program, which is targeted at improving freight movements across the State.

“This pilot program kick-starts the full $400 million Fixing Country Rail initiative which will deliver a highly functional transport network across the state for moving freight in and out of regional areas, and will ease pressure on our local roads,” Mr Gay said.

“Under this initiative, everyone will be a winner – whether you’re a farmer, a council or a local business – you are set to benefit from Fixing Country Rail.”

Mr Marshall said Fixing Country Rail would add to the big win Moree had in the second round of Fixing Country Roads with nine out of 122 shortlisted projects located in the Northern Tablelands.

“The following program will also be vital to supporting growing local industries such as cotton and grain in Moree, which rely on efficient and reliable freight to move products interstate and to ports and depots,” Mr Marshall said.

“Since 2011, the NSW Government has invested more than $274 million into upgrading and repairing grain rail lines in regional NSW – which has supported the movement of grain in and out of Moree over the last five years.

“While Fixing Country Rail funding will only be allocated to rail asset owners and managers, input from the people who produce and move freight will be critical for ensuring we get the best ‘bang for buck’ with any upgrades,” Mr Coulton said.

“Fixing Country Rail will fund infrastructure enhancements on the Country Regional Network, ARTC leased network and other assets owned by the NSW Government.

“Expressions of interest will be accepted from any organisation but shortlisted applications will need to be submitted by the relevant rail asset owner or manager.”

Expressions of interest for the Fixing Country Rail pilot will be opening on Monday until the end of April.