$154,100 TO FIX DANGEROUS CORNERS ON BUNDARRA ROAD NEAR ARMIDALE 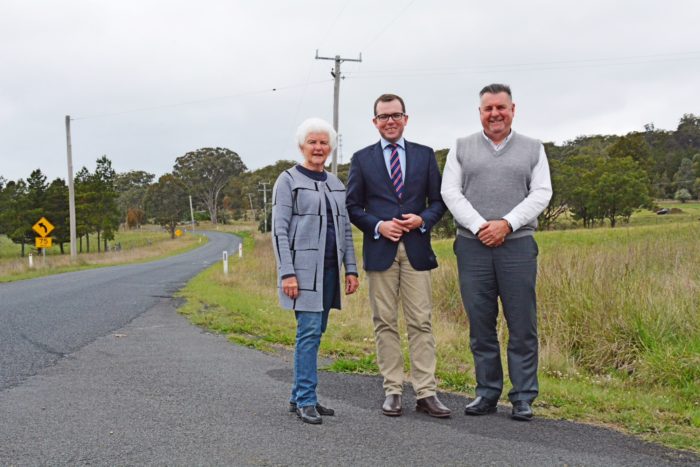 MEMBER for Northern Tablelands Adam Marshall has today announced further funding from the NSW Government, another $154,100, to improve safety along a dangerous section the increasingly busy Bundarra Road, west of Armidale.

The funding will be sued by Uralla Shire Council to rebuild one of the popular freight and transport route’s “trickier corners”.

“The sharp ‘S-bend’ on Bundarra Road between Barloo and Invergowrie Roads can be dangerous, particularly for the increasing number of drivers not familiar with the road, who take this route,” Mr Marshall said.

“With a narrow roadway and two quick corners one after the other, there’s currently very little room for error, making this area of particular concern as traffic on Bundarra Road and Thunderbolts Way increases.”

Mr Marshall said the road would be rebuilt thanks to the NSW Government’s Safer Roads program, which is funded by speed camera revenue across the State.

“This funding will allow council to rebuild 800 metres of road pavement on either side of Barloo Road, modifying the shape of the curves to make it easier and safer for drivers to navigate,” he said.

“The works will also widen the road surface with reinforced shoulders, allowing drivers crucial time and space to recover if they veer off course.

“These upgrades are part of the NSW Government’s efforts to improve the crucial Thunderbolts Way corridor, which has seen more than $4.2 million invested in major upgrades like the Abington Creek and Emu Crossing Bridge projects.

“As our country centres grow, it’s important that the regional roads network grows with it. Improving alternate routes between our cities ensures that motorists have choices when travelling for business or pleasure.”

Workers from Uralla Shire Council will commence construction works in March next year, with the project anticipated to be fully completed by June.

“This is an important upgrade for an increasingly utilised road – as Bundarra Road is regularly used by both freight and local traffic, this overhaul will keep the entire community safe,” Cr Pearce said.

“Uralla Shire Council is grateful for the funding assistance to help meet our goal of making roads around the region safer.”