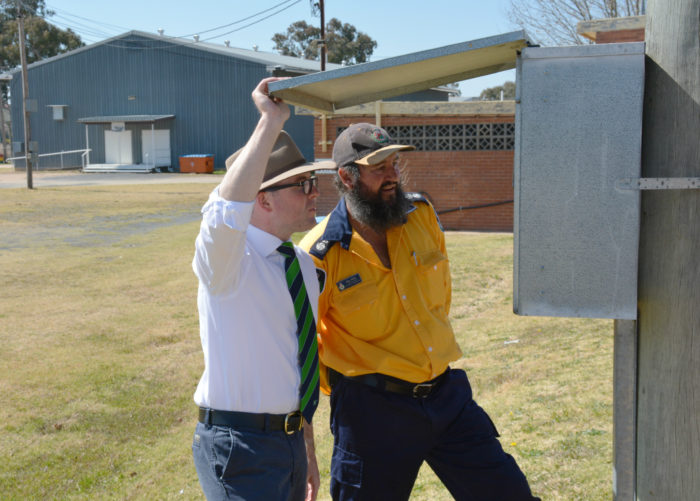 Northern Tablelands MP Adam Marshall and Inverell Showground Reserve Trust Chairman Ray White inspect one of the 126 ageing power boxes at the showground that will soon be completely overhauled.

EVENTS at Inverell Showground will soon run more smoothly than ever, with $161,450 in NSW Government funding to dramatically overhaul the facility’s electrical system and public amenities.

Member for Northern Tablelands Adam Marshall today announced the bumper funding with the Inverell Showground Reserve Trust, saying it set up the grounds for future growth in significant events.

“This funding will ensure the Inverell Showground remains in prime condition and is able to cater to the demands of a growing community and Inverell’s booming tourist trade,” Mr Marshall said.

“Of the 126 power boxes located across the showground, many are old, unusable or just behind current industry standards. The funding will dramatically modernise power infrastructure around the main ring, making accessing reliable and safe electricity much easier for campers and at show time.

“The Showground Reserve Trust had to play a game of whack-a-mole – replacing junction boxes as they died one by one. This new works program will get the entire ground up to scratch with one enormous investment.

“With the Inverell Show growing year on year, it’s essential that major upgrade projects like this are identified ahead of time – allowing the Inverell Showground Trust to win the battle against the elements and aging infrastructure.”

“The current system is very substandard, quite aging and some of the boxes are entirely unusable,” Mr White said.

“This is great news for all the showground users as soon all the electrical infrastructure will be brought up to standard.”

Mr Marshall said that the remaining funding of the $161,450 would go towards upgrading toilets on the southern side of the grounds.

“This will completely overhaul one of the toilets on the ground, improving safety and hygiene for all users,” he said.

“While much of these infrastructure improvements may be happening under the surface, Inverell locals will notice the results – through a smoother, cleaner and safer Inverell Show.”