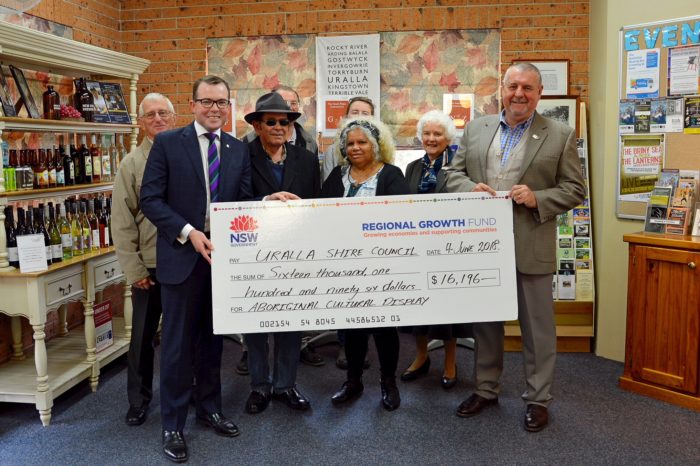 Mr Marshall made the announcement yesterday at the Uralla Visitor Information Centre with Mayor Mick Pearce, who said council would work with local Aboriginal Elders to showcase traditional pieces and give visitors a better understanding of the local heritage.

The grant will be used to set up artefacts in special display cabinets in the soon-to-be upgraded Information Centre.

“The display will allow tourists and Uralla residents to experience and learn about the local Aboriginal culture,” Mr Marshall said.

“It’s a great initiative and an idea that has come from the Elders and I’m pleased the council has backed this project.

“It will add another dimension to a tourist information centre that is increasingly attracting visitors who want to see and learn more about what Uralla has to offer.

“Uralla has never had a dedicated space to display Aboriginal artefacts but now it will and importantly it will also preserve local heritage for future generations.”

“Uralla has a proud history and having a dedicated place for Aboriginal history adds to that proud tradition.”

Another Elder Kathy Kelly, who is part of the team at the visitor information centre, said the project and grant is a small step but another in the broader reconciliation story and ties in with the Reconciliation Week theme for 2018, which is Don’t Let History be a Mystery.

The project is part of the NSW Government’s Regional Cultural Fund and is one of 68 from 12 regions across the state sharing in close to $50million in first round grants.

Cr Pearce said nearly one-third of council’s employees have Aboriginal heritage and Uralla was a town proud of its history, both Aboriginal, bushranger and settler.