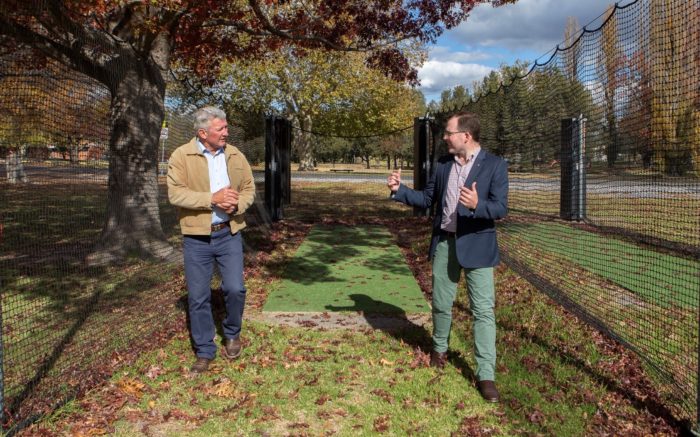 TENTERFIELD’S cricketers, fitness fanatics and families will all benefit from $171,627 in improvements to local sporting fields and public spaces with Minister for Western NSW Adam Marshall today announcing the State Government funding for Tenterfield Shire Council.

Mr Marshall said council would use the money to upgrade cricket nets at Shirley Park, build a shade structure over the playground at Rotary Park and install public exercise equipment at the hockey fields.

“The key to a prosperous community is a healthy population and this is exactly what Tenterfield Shire Council has set out to achieve by developing these facilities,” Mr Marshall said.

“Tenterfield’s cricketers will be a force to be reckoned once two new synthetic nets are installed at Shirley Park.

“The $68,418 turf practice pitches will be colour coded according to ball length, with these visual aids helping coach exactly where to aim the ball for good line and length bowling.

“Council will also improve sun protection at one of its most popular driver rest stops, with $59,420 to be spent on building a shade structure over the playground at Rotary Park.

“Improved sun protection will make the park more accessible for young families while also encourage more travellers to pull into the Driver Reviver.”

Those in the community who can’t afford a gym membership will have access to a series of new public exercise equipment, with council installing exercise stations with shade, near the footpath at the hockey fields. Strategically located between a number of sporting facilities, this equipment will be accessible to local clubs and community.

“I want to commend Council for taking such a proactive approach in encouraging its residents to get active and improve their health,” Mr Marshall said.

“We want as many of our residents as possible to be able to get out, be active and enjoy our great parks and facilities,” Cr Petty said.

“Through various types of community consultation all these projects have been identified as initiatives which will provide long term social benefits to the various groups and people who access them.

“With these grants now approved Council will commence the procurement and construction of the projects with the hope of having them delivered and accessible to the community by the end of this year.

“I would like to thank Adam and the State Government for their ongoing support of our town.”

Ready for the return of the Delungra Yard Dog Trials after a three-year hiatus are President Matthew Ehsman, left, Secretary... Read More