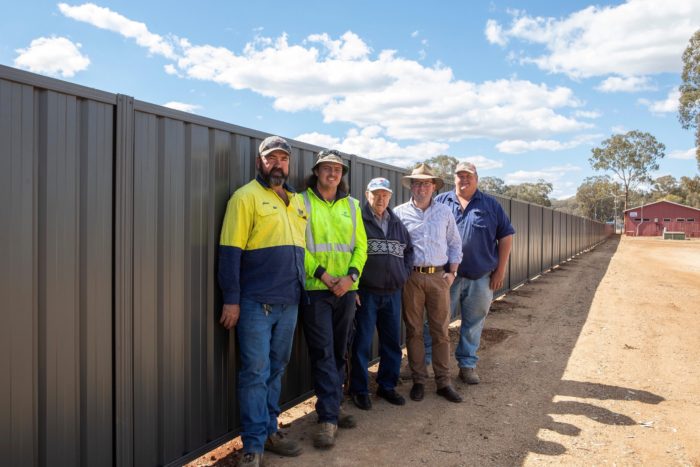 THE Inverell RSM Clay Target Club has moved to improve safety for competitors and pedestrians by installing an $18,000 fence, funded by the State Government, around the complex on the Glen Innes Road.

“The installation of this fence has not only made the venue safer but it has also improved the look of the grounds,” Mr Marshall said.

“Over several years I have worked with multiple shooting ranges cross the region to secure State Government funding to bring their facilities up to regulation shooting standards.

“This new 1.8 metre high Colorbond fence, which runs 100 metres along the front of the shooting range, is a credit to the club and will be of great benefit to the organisation as it continues to grow its membership.”

Club Secretary Jason Carpenter said he was pleased with how quickly the project came together.

“Because of our prominent location the Inverell Clay Target Club is always mindful of the high volume of foot and vehicle traffic which travels by the facility every day,” Mr Carpenter said.

“Previously we relied on nearby trees to hang signs but now this fence will allow us to more prominently display signage which alerts pedestrians to the fact they are in the vicinity of a gun club.

“We have also installed a wildlife friendly steel and wire rural-type fencing about 600 metres along two other sides of the ground.

“As a gun club you can never to too careful when it comes to safety and this fence has the added benefit of keeping trespassers out of our grounds and preventing them damaging our equipment.”

The club has 40 members who shoot every third Saturday of the month and also plays host to other gun enthusiasts, including local Sporting Shooters members and visiting clubs.