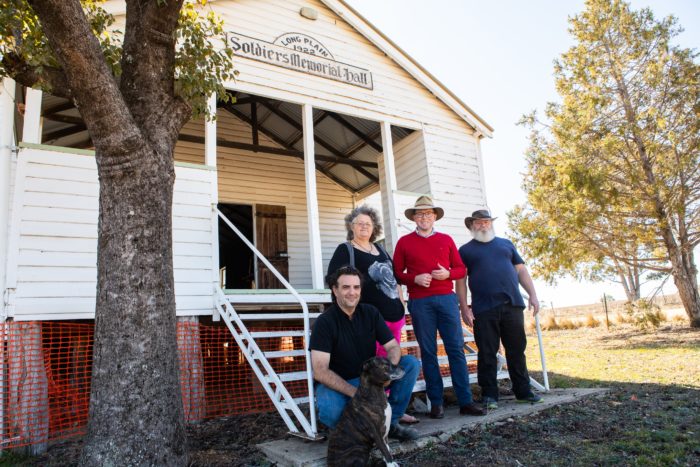 The hall, located east of Inverell, has had limited use in recent times however a group of volunteers led by Charlie and Suzanne Baker is now working to restore the grounds and dilapidated building to their former glory.

Mr Marshall said the beautiful old building had developed a 45 degree lean making it unstable, with termites also causing damage to one of the old outbuildings.

“I’m pleased the government has intervened and provided this funding which will allow the Reserve Trust to get on top of multiple building issues before the hall becomes unusable,” Mr Marshall said.

“The $18,733 will cover the cost of engineering assessments on the buildings structure, upgrades to power and plumbing on the grounds and payment for a pest controller to fumigate sites infected by termites.

“The termites in particular are of great concern because if they spread to the main hall and cause further damage the building could be rendered unsafe.”

“Longplain Hall was once a hive of activity where people gathered to play tennis, polo cross and dance the night away,” Mrs Baker said.

“The community is working to restore the hall with the Inverell Re-enactment Society hosting medieval events and market days, with all proceeds raised going to addressing these problem.

“We are hopeful over the next two years we can find enough money to bring the hall back to life, in time to celebrate its centenary in 2022.”

“The Longplain Hall really is a treasure and an important piece of local history,” Mr Marshall said.

“Built in 1922 trees were planted at the hall for the men of the district who lost their lives in World War I.

“This building which can seat up to 300 and has a stage and kitchen area which should be accessible to the entire community.

“I look forward to working with the trust to ensure the building is ready for its 100th birthday.”