$19,266 OPENS THE DOOR TO BETTER IMPRESSIONS AT ARMIDALE PCYC 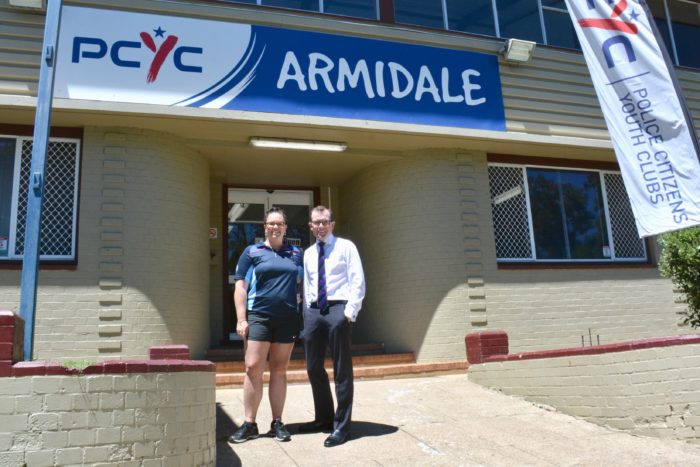 THE Armidale PCYC now boasts a more welcoming and functional entrance, with a $19,266 NSW Government grant enabling a major overhaul of the community centre’s foyer.

“The Armidale PCYC has served the city for 70 years, offering affordable and free sporting, creative and fitness oriented activities for the whole community,” Mr Marshall said.

“Its newly refurbished foyer will provide a much better first impression for young people who are using the Youth Centre for the first time, an important consideration when attracting new members.

“A replacement sliding door has also helped the building meet the latest building codes, allowing speedy escape in case of fire or an emergency.”

Mr Marshall said the PCYC had invested $10,000 of its own funds for the upgrades, which have already been completed from the Centre’s operational budget.

“Armidale’s PCYC is a valuable community organisation that delivers considerable benefits across the community, and any project that drives membership and gives young people greater options for activities will be great for our city,” Mr Marshall said.

“With a new look entranceway, new activities on their way and an enthusiastic new manager in Sam Davis, Armidale PCYC’s future is looking brighter than ever.”

Armidale PCYC Manager Sam Davis said the organisation acted as a ‘home base’ for young people, and planned to expand services over the coming months.

“The most important thing for young people is the inclusive familial feel, the PCYC allows people from all backgrounds to have opportunities they haven’t had anywhere else,” Mr Davis said.

ACCESSIBLE AMENITIES TO BE BUILT AT MYALL CREEK MEMORIAL HALL