$2.2 MILLION FOR NEW ROUNDABOUT TO IMPROVE SAFETY IN INVERELL 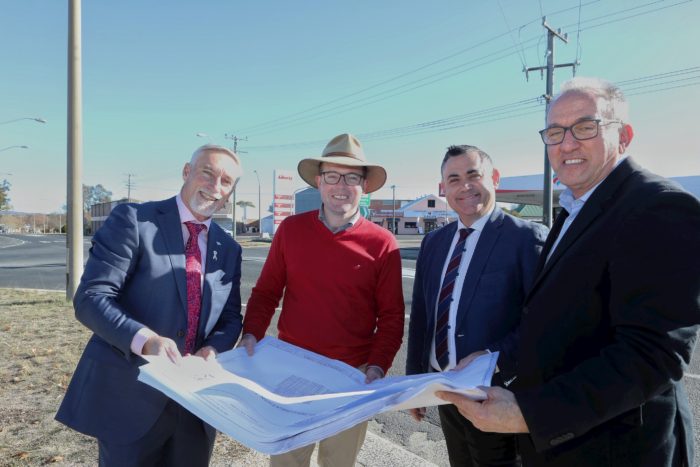 A NEW $5.2 million road improvement project at Inverell will now proceed after Deputy Premier John Barilaro and Northern Tablelands MP Adam Marshall today announced a $2.2 million grant to Inverell Shire Council to construct a roundabout at the notorious intersection of the Gwydir Highway and Bundarra Road

The pair made the announcement this morning with Inverell Shire Mayor Paul Harmon and councillors, who will partner with the State and Commonwealth Governments to realign the busy intersection and construct a roundabout to ensure smooth traffic flow.

Mr Marshall said the project would provide an important cash injection into Inverell’s businesses experiencing a down turn during the drought.

“This dangerous intersection has been a concern for council for a very long time and I’m glad to say after a lot of hard work it will finally be addressed,” Mr Marshall said.

“Installing a roundabout will allow traffic from Bundarra Road and Chester Street to travel more smoothly onto the Gwydir Highway, reducing the risk of motor vehicle accidents and improving the flow of freight along this major transport route.

“This is an important project which is strengthening the region’s road network and I’m proud the State Government has seen fit to announce it as one of the first to be funded through the Drought Stimulus Package.

“Council can now proceed with the project, acquire the additional land from the existing service station, realign the roads and construct the roundabout.”

“Getting this money out the door and into pay packets and local economies across regional NSW is a top priority and in the past two weeks we have announced funding for three regional projects worth a total $5.5 million, with more announcements to follow,” he said.

“This project will provide Inverell with infrastructure that will attract long-term investment and also immediately stimulate the local economy by providing work for tradies, suppliers and other local businesses.”

Inverell Shire Council and the Commonwealth Government will contribute $1.5 million each toward the project.