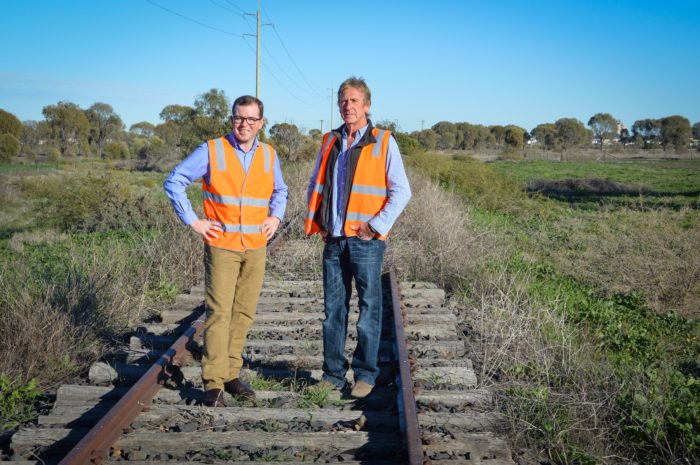 Northern Tablelands MP Adam Marshall with Broadbent Grain’s Moree operations manager Mick Maloney on the section of the disused Moree-Inverell rail line scheduled to be brought back into service as part of the state government’s Fixing Country Rail program.

BY INVESTING $2 million in reinstating a disused section of rail line at Moree, the NSW Government will enable hundreds of thousands of tonnes of grain, cotton and pulses to be railed to Newcastle instead of being sent by truck to Queensland.

“The work will link Broadbent Grain’s receival facilities, which are on the abandoned Moree-Inverell line, with the main line servicing Moree,” Mr Marshall said.

“That means that about 250,000 tonnes of grain and 6,400 twenty foot containers of cotton and pulses – the equivalent of 6,000 trucks – per year can be moved by rail to Newcastle instead of having to go by road to Queensland ports.

“This is a big win for Moree’s rural economy and for jobs in country NSW. It’s an investment in appropriate transport options, better roads, and greater efficiency.”

Broadbent Grain’s Moree operations manager Mick Maloney said his company was thrilled with the news and looked forward to being able to use the rail line.

“This is a very exciting project for our company and the whole region.”

Mr Marshall said the government was determined to shift more bulk freight onto railway lines to ensure produce can get from paddocks to ports as quickly and efficiently as possible.

“The freight transport network is the backbone of country NSW and we need to improve its efficiency to take more freight off our local and regional roads – a massive win for bush communities, economies and the state’s producers,” Mr Marshall said.

A total of 10 projects across NSW will receive a share of $15 million under the Fixing Country Rail pilot program, in addition to the $400 million to be invested into the program itself.

The first full round of Fixing Country Rail funding will open later this year. Regional councils, producers, rail operators and other businesses are encouraged to work together and apply for funding under the program.

Additional information on the Fixing Country Rail program can be found at www.freight.transport.nsw.gov.au/network/rail/fixing-country-rail/index.html