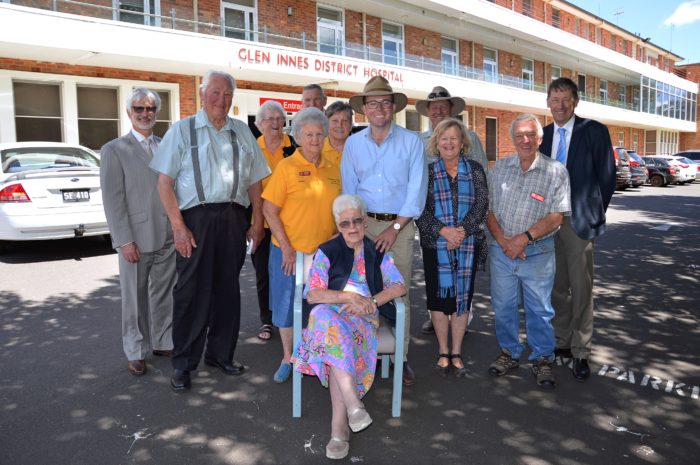 NORTHERN Tablelands MP Adam Marshall has pledged a $20 million major upgrade of Glen Innes District Hospital, including the complete demolition of the derelict former nurses’ quarters and the construction of new staff accommodation at the hospital to attract medical staff tp the community, including specialists, nurses and midwives.

Mr Marshall announced the NSW Government commitment at the hospital yesterday alongside Mayor Carol Sparks, Councillors and members of the hard-working Hospital Auxiliary to rapturous applause.

“This upgrade will see most of the hospital gutted and completely refurbished, providing modern healthcare facilities similar to what Armidale and Tamworth have and Inverell soon will,” Mr Marshall said.

“Pleasingly, the eyesore that is the old nurses’ quarters will be completely removed and new staff accomodation built at the hospital to help attract and support medial staff like doctors, specialists, nurses and midwives at the hospital.”

Mr Marshall said securing the funding commitment from the Health Minister would not have been possible without the strong support of the local community, which gathered more than 3,000 signatures on a petition requesting the funding to undertake the major upgrade.

“The Glen Innes community should take a bow,” Mr Marshall said. “Glen Innes always rallies to the call to support a local cause or people in their own community. Thank you to everyone who supported this push – this win belongs to you.

“I’ve always believed that people power still counts in politics and having all those signatures, along with many other letters and emails from locals made a huge difference at my meetings with the Minister and Treasurer when lobbying for the funding commitment.”

“I am beyond thrilled with this outcome, while I was confident going in to bat, it wasn’t a done deal until the force of community support hit the table – it’s a bloody cracking result thanks to this wonderful community.

“After more than a decade of disappointments and knock backs, it is now Glen Innes’ turn to have its health facilities brought up to par with modern health care standards.

“I look forward to joining the community watching this project take shape, as I have in Armidale and Inverell in recent years.”

Mayor Carol Sparks welcomed the news saying it would be good for the community to have improved health services.

“This is something that council has been pushing for a number of years now and this is really good news,” Cr Sparks said.

“I did not think we’d ever get here,” Mrs Sharman said. “We’ve been knocked back a few times and we’d nearly lost hope but Adam’s announcement is one of the best things I have ever heard.”

Mr Marshall said if the government was returned at the 23 March election, planning work would begin on the project before the commencement of works.