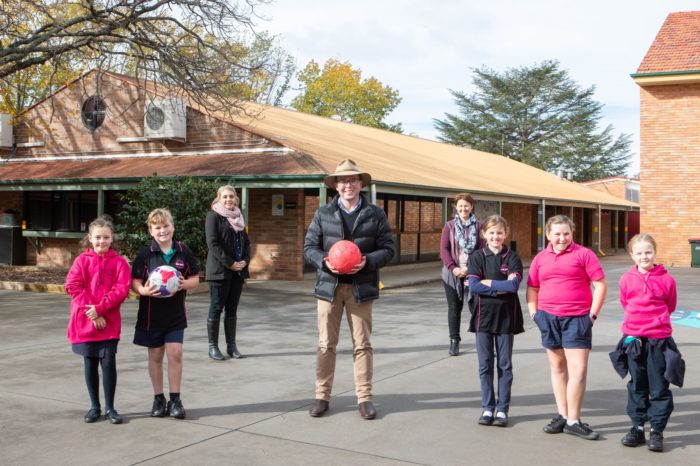 The efforts of the Glen Innes Netball Association to score new netball umpires has been bolstered today, with Northern Tablelands MP Adam Marshall announcing a $2,000 grants from the State Government to train and develop players who may be interested in taking up the whistle.

Mr Marshall said being a netball umpire or official was often a thankless job, but it was one of the most important roles on the court.

“In order to boost Glen Innes’ umpiring and coaching ranks the netball association encourages its intermediate and representative players to have a go to enhance their knowledge and confidence.

“For those players who wish to progress these skills further this grant will support their ongoing training costs and umpiring assessments.

“If umpiring is not of interest, the association hopes some players may consider taking up coaching roles, in particular with the senior representative teams.

“With the development of the $5.5 million Glen Innes Netball complex underway, the town is set to become the home of the netball in northern NSW.

“With this in mind it’s important the association works hard now to build its player and official base so it is in a potion to successfully intercept any big carnivals or events which might later be passed its way.”

“With so many sport options for families to choose from we are finding our junior ranks are declining as parents encourage their children to pick one sport for everyone to play,” Ms Cooke said.

“To inspire existing players, and hopefully attract new ones, we will put this money towards attracting high profile netballers like Susan Pettit and Gretel Tippett to town, to host their popular training and development days specifically targeted at junior players.

“These events are known to foster mateship and inspire players and I think would be beneficial in helping to promote our game locally.

“As an organisation we are so excited about what the future holds for netball in Glen Innes and hope through training and development initiatives we can continue to draw, retain and encourage players to participate to the absolute maximum.”