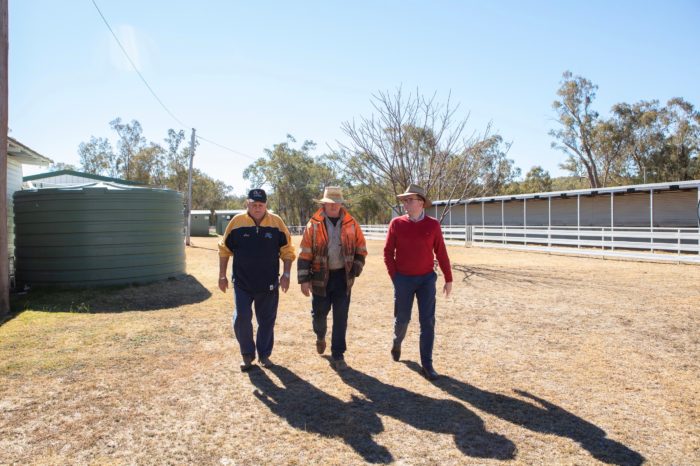 THE sprint to the front of the toilet queue at Warialda Racecourse can be slow on Cup Day but a $20,000 State Government grant announced today by Northern Tablelands MP Adam Marshall will significantly reduce that time.

He said the Warialda Racecourse might only have one race meet a year but it’s fast becoming the social centre of the Gwydir Shire, drawing hundreds of visitors to town.

“There’s nothing worse than missing your horse win because you are stuck in the queue for the toilet,” Mr Marshall said.

“This grant will allow work to begin on removing the dilapidated women’s toilet block and replacing it with a new, larger facility which will accommodate big crowds and match the other updated buildings on the grounds.

“By working with the State Government over the last four years $77,485 has been spent by the Trust improving facilities with a large shed built for shade, a new rain water tank installed and upgrades to the old men’s toilets.

“The venue has so much potential beyond just horse racing and I think it’s great to see such a proactive committee working to diversify the grounds so more people can access this hidden treasure.”

Reserve Trust President Andrew Phillips said the trust wanted to bring facilities up to a standard which would allow people to host a wedding out at the track.

“We have an incredible facility at the race course which has the potential to be used a lot more,” Mr Phillips said.

“Due our location on the outskirts of Warialda and ability to host campers I think we have the perfect venue for 21st birthdays and weddings and I’m hopeful as word gets around we will soon see many happy couples tying the knot here.”