$20,000 KICK IN THE KILT FOR GLEN INNES OUTLANDISH SCOTTISH FESTIVAL 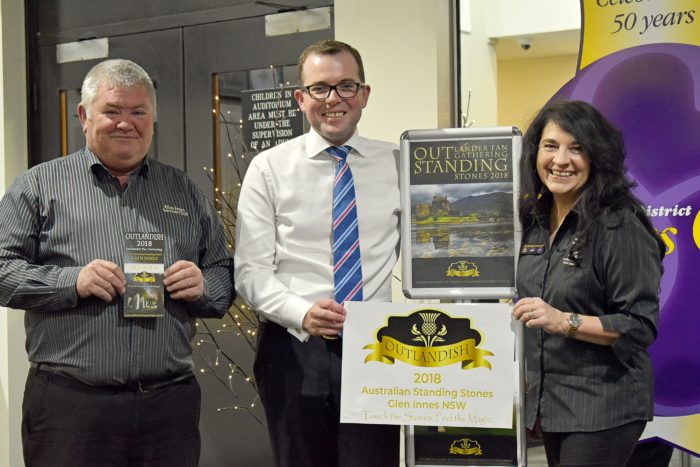 GLEN Innes is getting a real kick in the kilt for its own Scottish highlands festival in October with a $20,000 material boost from the NSW Government.

Northern Tablelands MP and Tourism and Major Events Minister Adam Marshall has delivered the funding boost for the Outlandish – Outlander Fan Festival to help locals and tourists kick up the tartan celebrations.

“Glen Innes is the Gaelic heart of Australia and this festival is a fantastic way to showcase Glen Innes’ unique history and capture the essence of the Scottish highlands of the 18th century,” Mr Marshall said.

“I am delighted to announce both as the local Member and the Minister for Tourism and Major Events that Outlandish has successfully applied for $20,000 from the regional tourism fund to take the event to new heights.

“This year, the committee behind ‘Outlandish’ hopes to expand the reach of their festival and market the festival to a broader audience, including Sydney.

“Outlander is a hugely successful television series that is adored by millions of fans around the world, but it is rare that fans have the chance to immerse themselves in a show’s historical background.

“Short of being transported back to 1743 Scotland, Glen Innes provides the perfect place to hold an Outlander Fan Festival and will draw in a multitude of fans keen to experience everything Celtic that Glen Innes has to offer.”

Mr Marshall said regional NSW was attracting record visitors and funding that supports these unique events helped stake a claim on the region’s share of the tourism pie.

“The tourism sector is booming in the New England and our region recently achieved its highest volumes of domestic overnight expenditure on record,” Mr Marshall said.

“Tourism brings millions of dollars into our local economy and is supporting a tourism jobs increase. Last year Australian tourists alone spent $638 million in the New England North West – up a whopping 33.5 per cent from 2016.”

The Glen get together will run over three days in October and will offer Outlander fans, visitors and curious locals the chance to enjoy recreations from the TV series, like the famous Lantern Dance scene which will be held at the Standing Stones.

“There will also be a Gaelic wedding, mini-village market and a look-alike competition and people will be able to enjoy authentic Scottish food at the Crofter’s Cottage – a building which is a replica of the crofter’s cottages found across Scotland at the time Outlander is set,” Mr Marshall said.

“Festivals such as Outlandish are a fantastic way to fuel our local economy by putting more heads on hotel beds, diners in our restaurants and shoppers in our boutiques,” Mr Marshall said.

“I want to see every city, town and village in our area benefit from this boom, and events like Outlandish help keep our local gems on the tourism radar.

“I congratulate the Outlandish Committee for their hard work in running this unique festival once again and look forward to visitors enjoying their time here in Glen.”