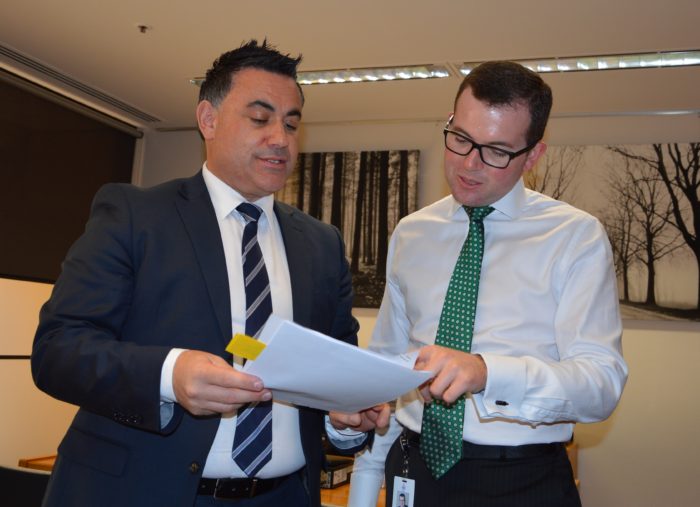 ONE of the final roadblocks hindering the construction of a helipad at the Glen Innes District Hospital has been removed, with the NSW Government announcing a $20,000 grant for the Glen Innes United Hospital Auxiliary to cover the cost of developing a detailed design concept plan for the project.

Announcing the grant this morning with Northern Tablelands MP Adam Marshall, Minister for Regional Development John Barilaro said the funds would be crucial to progressing the priority community-backed project.

“The Glen Innes Hospital helipad project has enormous support in the community and will make a real difference to the lives of local people when constructed,” Mr Barilaro said.

“The Glen Innes United Hospital Auxiliary has led fundraising efforts for the helipad over the last two years, with support from Glen Innes Severn Council, the local Lions Club and in-kind support from local builders and tradies.

“Adam Marshall has been tireless in his lobbying for this project in support of the community and recently secured a commitment from Hunter New England Local Health District that the helipad project would proceed if funds for the design plans could be found – now it can go ahead.”

A delighted Mr Marshall welcomed the funding announcement and thanked the Minister for his support of the community’s helipad campaign.

“This is fantastic news for the Glen Innes community and I’m delighted that Minister Barilaro and the State Government saw merit in our case,” Mr Marshall said.

“The community has demonstrated it is willing to do the heavy lifting on this important project and this funding support for the preparation of the design plans is a very welcome boost.

“I’ll be getting in touch with Hunter New England Health senior management today to formally advise them of the funding so that they can get the design work for the helipad underway.”

The MP praised the Glen Innes Hospital Auxiliary, which has been pursuing the helipad project vigorously.

“I want to thank President Jan Sharman and Auxiliary members for spearheading this campaign for almost the last two years and everyone else in the community who has been so patient and never given up – we are very close now,” he said.

“To raise $80,000 so far is a tremendous effort and after today’s announcement I’m sure more will be forthcoming.

“I wasn’t going to have the community using a single dollar of the money raised to do design plans – it should all be put towards constructing the helipad – and now it can be.

“This is incredibly exciting news for Glen Innes and will only be surpassed by the day we turn the first soil on the construction of the helipad.”