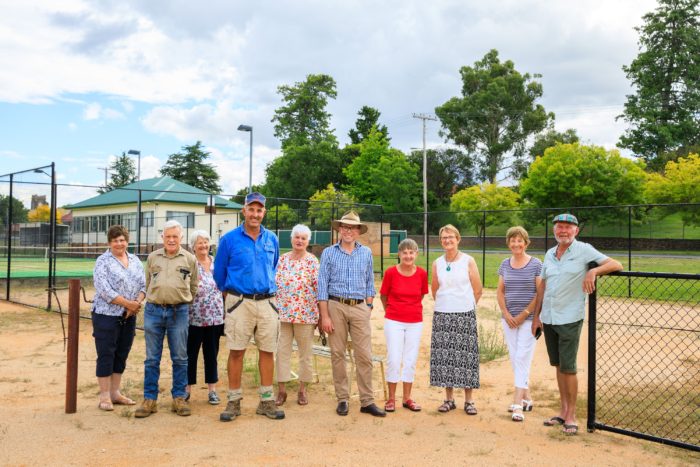 WITH a focus on developing junior players, the Glen Innes Tennis Club is embarking on a major overhaul of its old clay tennis courts, utilising a $205,000 State Government grant for the transition to hard surface.

Since 2018, the State Government has provided almost $420,000 for improvements to Glen Innes Tennis Club, including a new boundary fence and resurfacing of two old synthetic courts.

“It’s an end of an era for Glen Innes Tennis Club as the last three clay courts are upgraded to the popular hard surface,” Mr Marshall said.

“This is the way most tennis clubs are going, as they transition their high maintenance clay courts to less labour intensive hard or synthetic courts.

“While the clay courts have stood the test of time they don’t quite meet the standards of the modern game, requiring hours of preparation work and being highly sensitive to wet weather.

“On completing this project, Glen Innes will boast a total of seven synthetic courts and three hard courts, from my experience both very different surfaces to play on.

“This is a major project for the club which will make managing the facility much easier for the future.”

“Over the last five years Glen Innes Tennis Club has done a power of work to modernise our facilities and make it a venue capable of attracting major tournaments,” Mr Whyte said.

“The success of securing a Stronger Country Communities Fund grant will allow us to tackle one of the more expensive components of our facility upgrades, with the replacement of clay courts with hard surface.

“The offering of a hardcourt surface will set us apart from other clubs and will be beneficial to our juniors, who are developing their skills and able to learn on a surface that is mainly found in larger metropolitan areas.

“Once again the club thanks Adam and the State Government for its support in delivering first class tennis facilities to the people of Glen Innes.”