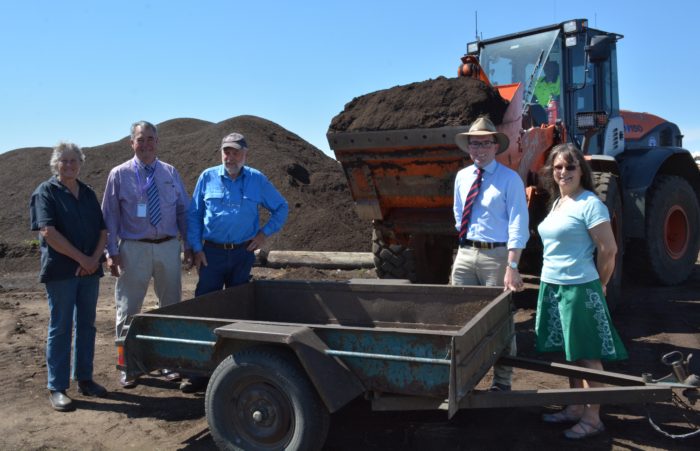 ARMIDALE’S popular and award-winning organics recycling scheme City to Soil will be expanded to the Guyra community, thanks to a $208,400 NSW Government grant, announced today by Northern Tablelands MP Adam Marshall.

Pioneered in Armidale six years ago, City to Soil allows residents to recycle their kitchen waste and food scraps, even used pizza boxes and paper towels, via their green waste bin and turn it into compost for the community – with the ‘black gold’ it creates highly sought after in the region.

Mr Marshall was joined by Armidale Regional Council Mayor Simon Murray and local gardening whiz Jo Leonie to announce that Guyra residents would soon be able to access the scheme, by using special City to Soil biodegrade bags, made from broccoli, to place the organic waste in their green waste bins, rather than the regular general waste.

“Long after we’re done with our food scraps, paper towels, and pizza boxes, our bio-waste has another life as compost prized by gardeners and farmers alike,” Mr Marshall said.

“Scraps from Guyra will now join Armidale’s bio-waste, entering a carefully controlled composting process that produces A-grade fertiliser with 30 times less contamination of similar schemes in other areas of the State.

“Armidale was the first major regional city to implement this scheme city-wide, and eligible Guyra residents will soon receive a City to Soil bin that allows their household to take part.

“This will divert thousands of tonnes of biodegrade material each year from landfill and create even more rich and highly sought-after compost.”

“This will make for many happy green thumbs in Guyra and Armidale.”

Mr Marshall said the $208,400 funding would benefit Guyra locals and garden beds across the region.

“While City to Soil has developed an incredible reputation for quality, limited recycled resources and a carefully controlled process means the compost often sells out quickly,” he said.

“I congratulate council on securing this funding and expanding what is a leading environmental scheme across the State.”