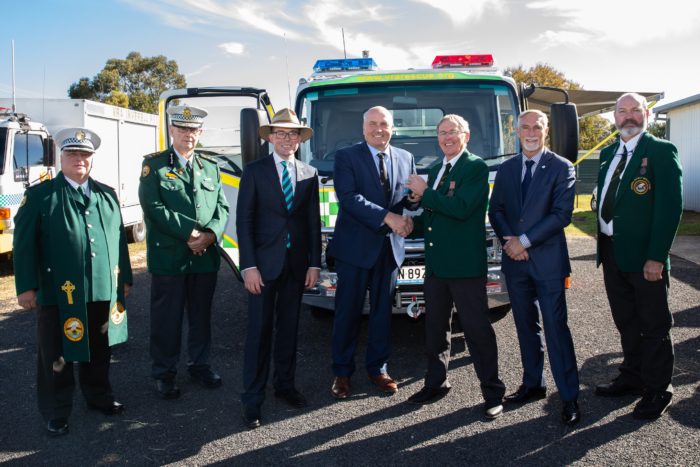 FROM a repurposed Coca-Cola delivery truck to a state-of-the-art light rigid rescue vehicle, Inverell Volunteer Rescue Association (VRA) is ready to take on any type of emergency, with Northern Tablelands MP Adam Marshall and Minister for Police and Emergency Service David Elliott last week handing over the keys to the $220,000 new rig.

Mr Marshall said with increased power and modern hydraulic winching, Inverell VRA would be able to respond to incidents more quickly and efficiently.

“Whether it’s a cat up a tree or motor vehicle accident, Inverell VRA’s 10 members are trained to respond and support in any type of emergency,” Mr Marshall said.

“The new Isuzu truck replaces what was a repurposed delivery vehicle that was starting to experience engine troubles, in particular when travelling up hills.

“Now, the service has a purpose built vehicle which is equipped with hydraulic winches, harnesses for working at heights and emergency response tools including chainsaws, ladders and branch lopping equipment.

“In particular this vehicle has a built in mounted light stand which can be raised and positioned with the press of a button.

“This is important for the timely response to night time motor vehicle accidents, instead of relying on individual free standing lights on arrival.

“I thank President of Inverell VRA Frank Fleming, Captain Jason Tom and the volunteers for the important work they do protecting the community and supporting other emergency services in times of disaster.”

“Our old truck served us well over many years but it was starting to slow up, which was concerning when tasked to a serious incident,” Mr Fleming said.

“Over the next few weeks VRA members will familiarize themselves with the vehicle’s layout, finding where tools are stored and working out the most efficient way to mount and access winches, so that when the next call-out comes we are ready to go.

“Roughly each year we respond to 10 motor vehicle accidents, be it car-on-car or car into a tree. These can often life-or-death situations which is why it’s important that we have the capabilities to respond quickly and efficiently.

“Long-term this vehicle will enhance our capabilities and I thank Adam and the Minister for their support of the VRA.”