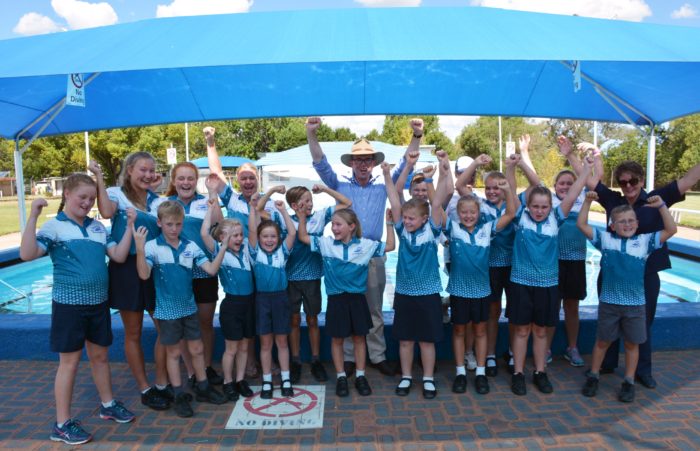 DIVING into the Bingara Pool will no longer knock the breath out of your lungs, thanks to a $229,834 project funded by the NSW Government that promises to keep the water at a balmy 28 degrees throughout the winter months.

With the pool closed for winter from today, Member for Northern Tablelands met with swimmers from Bingara Central School last week to announce that major upgrades would soon extend the popular facility’s operating season.

“Bingara has produced a promising group of local swimmers, but the local pool is only just treading water,” Mr Marshall said.

“The 55-year-old facility has been battling with leaks for years and the region’s frigid winters have limited usage to a five month window from mid-October to late March.

“Thanks to a new solar heater and pool blanket, the water will be kept to a comfortable 28 degrees through a longer swim season, giving promising young swimmers a better opportunity to hone their aquatic skills.

“With three students at Bingara Central School heading for State Championships this year, each additional day of training will give them an upper hand on their competition.”

Funding for the project has come from the NSW Government’s Stronger Country Communities Fund, part of the $1.3 billion Regional Growth Fund dedicated to improving community amenities in rural and regional areas.

“Council has been battling with leaks for years, yet attempts to plug the many holes have been found to be expensive and temporary,” Mr Marshall said.

“A new lining will stop leaks, saving the community thousands of litres of water and driving down running costs, delivering residents a better return on their rates.

“This project will split the existing pool in two, creating a heated 25 and 11 metre pool that will allow different groups of swimmers to use it for training, lap swimming and taking a casual dip simultaneously.”

“The Bingara Pool is an essential facility for the town, both of our towns are very passionate about swimming, and you need somewhere to be able to learn this vital skill,” Cr Coulton said.

“Unfortunately the problems at Bingara Pool are beyond council’s means to fix. We’ve been continuously patching it up, but this will be a long term solution.”