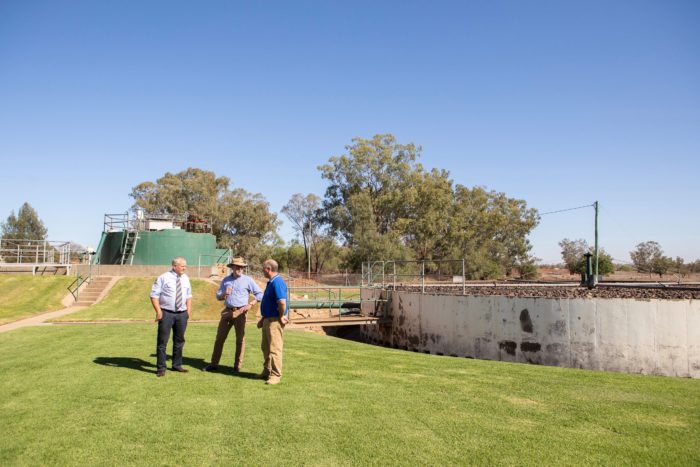 GWYDIR Shire Council staff will get to work on a plan to connect around 80 homes north of the Gwydir River to Bingara’s sewerage system, after Northern Tablelands MP Adam Marshall today announced a $231,000 grant from the State Government.

Mr Marshall said council had been working for some time to secure the funds needed to plan an extension of Bingara’s sewer system and upgrade the sewerage treatment plant.

“Many homes in north and east Bingara utilise in-ground septic tanks and effluent absorption trenches and are not connected to the town system,” Mr Marshall said.

“Unfortunately several of the properties which have these systems are located upstream of Bingara’s water supply extraction point in the Gwydir River and pose a health risk should effluent leak into the waterway.

“Council will also contribute $77,000 to the planning, which will include consultation with 80 property owners, project scope, surveying and design,” Mr Marshall said.

“Bingara’s Sewerage Plant was constructed in the 1970s and has served the community well over the last 40 years,” he said.

“Council will use this planning money to look at updating the facility by addressing concrete corrosion and other minor issues at the plant.

“Despite the drought, Bingara is a vibrant community which relies heavily on tourism, which is largely based around the banks of the Gwydir River.

“As more people come to town, the government to work with council to ensure the infrastructure is in place to handle increased pressure on services like water and sewerage and I congratulate Gwydir Shire Council for its efforts to proactively address this issue, before it becomes a major problem.”