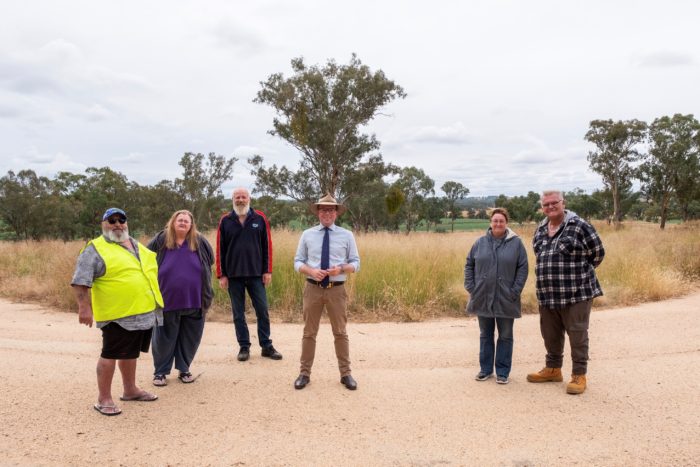 INVERELL Mower Sports Club is cruising towards the completion of its racing track on Ashford Road, with Northern Tablelands MP Adam Marshall today announcing a further State Government contribution of $23,402 to continue improvements in the pit area.

Mr Marshall said the organisation had done a fantastic job setting up the venue and reviving the old, run down Inverell go-kart circuit.

“The starting line is set, safety barriers are up and the club is now narrowing in on final track improvements in preparation for what will hopefully be a big year of racing in 2021,” Mr Marshall said.

“This grant will finalise the pit area, with a new layer of dirt to be laid and compacted, firming up the surface.

“The additional dirt will make the pit safer for racing teams, by improving vehicle traction as drivers pull in to fuel up or undertake maintenance on their vehicles.

“If regional economies are to overcome the fall-out of COVID-19 and the drought, they are going to need innovative ideas, like the mower sports precinct, to generate new business opportunities and attract visitor dollars to town.”

“Our committee and supporters have worked tirelessly to get the grounds and track up to a standard which is presentable and meets safety guidelines,” Mr Jackson said.

“Because mower racing is a developing sport, there are lots of different regulations we have to meet before we can be signed off for competition by the NSW Government and Police – but step-by-step we are getting there.

“We have contracted Inverell business AJ Earth Moving to undertake this project which we expect it to be finished before Christmas.

“Next year we will be lodging a development application with Inverell Shire Council to install a burn-out pad on the infield of the track, which will be the first in this region.

“Once we are able to race regularly and competitively, the pad will be another draw-card to entice racers to our events.

“I want to thank Adam again for his continued support of our club, and look forward to seeing him race around the track once the new pit is finished.”

$6,920 GOAL FOR ARMIDALE JUNIOR HOCKEY AHEAD OF STATE CHAMPS