COUNCIL ADMINISTRATOR WELCOMED TO THE REGION BY LOCAL MP 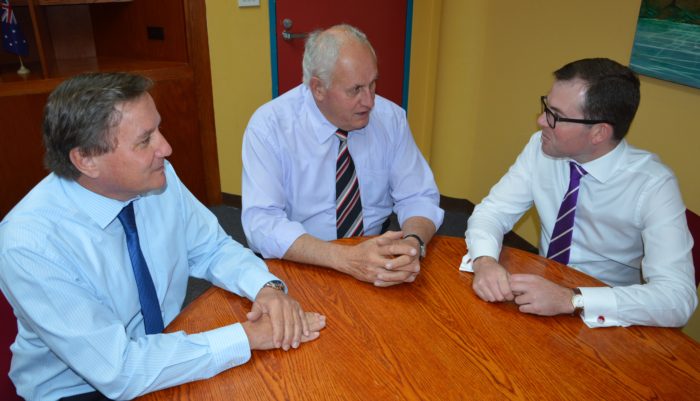 A MEETING yesterday considered the early agenda for the merger of Armidale and Guyra councils, starting with a change of name, and the excision of Tingha into Inverell Shire.

“We were Mayors together and saw a fair bit of each other around the state,” he said. “I have a lot of confidence in Ian and wish him well as he performs this very important role over the next 15 months.”

Mr Marshall said he was pleased that the ball would get moving soon on Tingha’s future.

“There is a legislated process for boundary adjustments that the Administrator will initiative very soon at the first meeting of the new council,” he said.

“It’s important to the Tingha community and a move which has the support of Inverell Shire Council, as well as the former Guyra and Armidale Dumaresq Councils.”

The local MP also put his case to change the name of the new council to the New England Regional Council.

“I don’t believe the gazetted name is the most appropriate for the new council,” he said.

“New England Regional Council is easily identifiable, but importantly location neutral, which is essential for a new council looking to start a fresh with a broader focus than just one city.

“This was also the name recommended by the Delegate when considering the merger and the one generally agreed by both former councils prior to the merge.

“The ‘New England’ is a highly marketable and recognisable brand all over NSW.”

Mr Marshall said he was also pleased to learn that Dr Tiley would be undertaking his duties on a full-time basis and will be on deck Monday to Friday each week.

“A Local Representation Committee will also be established to provide advice to the Administrator and I’m glad the knowledge and experience of the former Mayors and Councillors will not be completely lost, with opportunity for them to be part of this group.