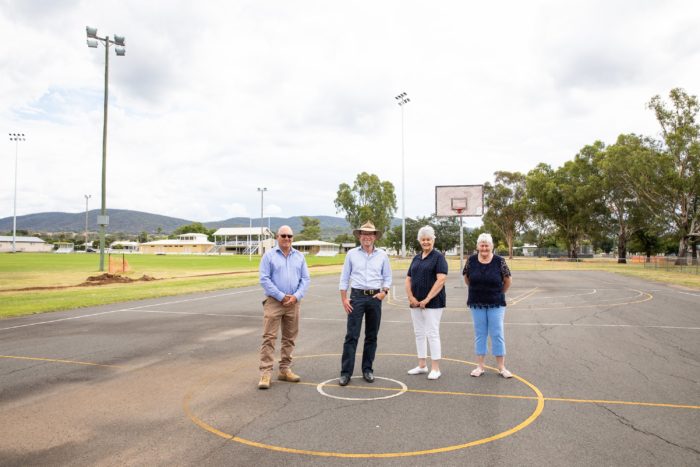 A NEW roof to be built over the outdoor netball and basketball court at Bingara’s Gwydir Oval will give the community an all-weather space in which to play and train, with Northern Tablelands MP Adam Marshall today announcing a $247,562 State Government Regional Sport Facility Fund grant.

Since 2018, the State Government has provided almost $700,000 to redevelop amenities and facilities at Gwydir Oval, where the courts are located.

“Unlike most towns in our region, Bingara does not have an indoor multi-purpose hall or undercover space where the community can participate and enjoy sport out of the weather,” Mr Marshall said.

“This project will change that through the construction of a large-scale shed with open sides over the existing outdoor netball/basketball court at Gwydir Oval.

“LED lighting will be installed along with four aluminium tiered seating encouraging spectators and new competitions.

“In addition the cracked, weather worn asphalt will be resurfaced with new line marking for netball and basketball put down.

“Protection from the weather will limit future deterioration of the court surface, line markings and back boards, meaning less costly maintenance and upkeep for council.

“With lights allowing play at night the local netball, basketball, junior rugby league, senior league and rugby union clubs will have a space to train out of the sun and rain.

“With play under lights soon on the cards I expect we will see twilight netball and basketball take-off in Bingara, a great opportunity to increase access to sport in the community.”

Gwydir Shire Council will contribute around $91,000 to the project.

“This is a great example of the State Government, through the Regional Sport Facility Fund, working with council to improve local facilities for the benefit of the whole community,” Mr Cooper said.

“The improvement to the facilities will promote and attract local and regional sport encouraging economic stimulus to the area not only during construction, but after completion with sporting participants spending money in the local community.

“Council estimates the project will be completed by November this year. Several quotations from local contractors were obtained for the grant application and these will be revised and engaged to enable the project to move forward.

“The project adds value to Gwydir Oval as a sporting precinct and I am confident the facility will be well utilised by the community.”